War or peace on the Indus? 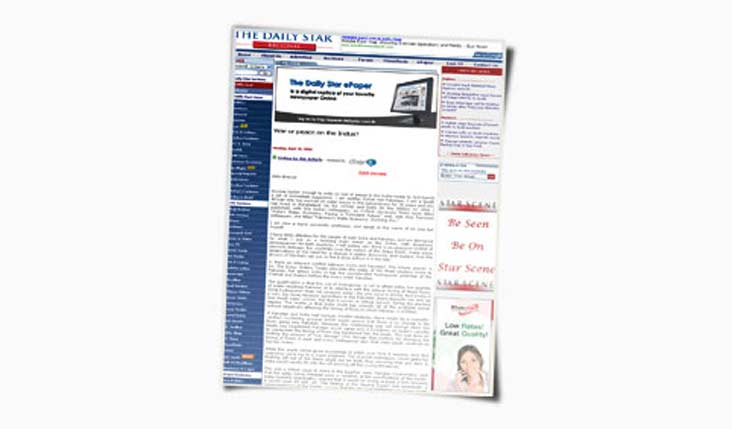 The Daily Star
By John Briscoe

Anyone foolish enough to write on war or peace in the Indus needs to first banish a set of immediate suspicions. I am neither Indian nor Pakistani. I am a South African who has worked on water issues in the subcontinent for 35 years and who has lived in Bangladesh (in the 1970s) and Delhi (in the 2000s). In 2006 I published, with fine Indian colleagues, an Oxford University Press book titled “India’s Water Economy: Facing a Turbulent Future” and, with fine Pakistani colleagues, one titled “Pakistan’s Water Economy: Running Dry.

” I am now a mere university professor, and speak in the name of no one but myself.

I have deep affection for the people of both India and Pakistan, and am dismayed by what I see as a looming train wreck on the Indus, with disastrous consequences for both countries. I will outline why there is no objective conflict of interests between the countries over the waters of the Indus Basin, make some observations of the need for a change in public discourse, and suggest how the drivers of the train can put on the brakes before it is too late.

Is there an inherent conflict between India and Pakistan? The simple answer is no. The Indus Waters Treaty allocates the water of the three western rivers to Pakistan, but allows India to tap the considerable hydropower potential of the Chenab and Jhelum before the rivers enter Pakistan.

The qualification is that this use of hydropower is not to affect either the quantity of water reaching Pakistan or to interfere with the natural timing of those flows. Since hydropower does not consume water, the only issue is timing. And timing is a very big issue, because agriculture in the Pakistani plains depends not only on how much water comes, but that it comes in critical periods during the planting season. The reality is that India could tap virtually all of the available power without negatively affecting the timing of flows to which Pakistan is entitled.

If Pakistan and India had normal, trustful relations, there would be a mutually-verified monitoring process which would assure that there is no change in the flows going into Pakistan. Because the relationship was not normal when the treaty was negotiated, Pakistan would agree only if limitations on India’s capacity to manipulate the timing of flows was hardwired into the treaty. This was done by limiting the amount of “live storage” (the storage that matters for changing the timing of flows) in each and every hydropower dam that India would construct on the two rivers.

While this made sense given knowledge in 1960, over time it became clear this restriction gave rise to a major problem. The physical restrictions meant gates for flushing silt out of the dams could not be built, thus ensuring that any dam in India would rapidly fill with the silt pouring off the young Himalayas.

This was a critical issue at stake in the Baglihar case. Pakistan (reasonably) said that the gates being installed were in violation of the specifications of the treaty. India (equally reasonably) argued that it would be wrong to build a dam knowing it would soon fill with silt. The finding of the Neutral Expert was essentially a reinterpretation of the Treaty, saying that the physical limitations no longer made sense. While the finding was reasonable in the case of Baglihar, it left Pakistan without the mechanism – limited live storage – which was its only (albeit weak) protection against upstream manipulation of flows in India. This vulnerability was driven home when India chose to fill Baglihar exactly at the time when it would impose maximum harm on farmers in downstream Pakistan.

Had Baglihar been the only dam being built by India on the Chenab and Jhelum, this would be a limited problem. But following Baglihar is a veritable caravan of Indian projects – Kishanganga, Sawalkot, Pakuldul, Bursar, Dal Huste, Gyspa. The cumulative live storage will be large, giving India an unquestioned capacity to have major impact on the timing of flows into Pakistan.

This is a very uneven playing field. The regional hegemon is the upper riparian and has all the cards in its hands. This asymmetry means that it is India that is driving the train, and that change must start in India. In my view, four things need to be done.

First, there must be some courageous and open-minded Indians – in government or out – who will stand up and explain to the public why this is not just an issue for Pakistan, but why it is an existential issue for Pakistan.

Second, there must be leadership from the government of India. Here I am struck by the stark difference between the behavior of India and that of its fellow BRIC – Brazil, the regional hegemon in Latin America. Brazil and Paraguay have a binding agreement on their rights and responsibilities on the massive Itaipu Binacional Hydropower Project. The proceeds, which are of enormous importance to small Paraguay, played a politicized, polemical anti-Brazilian part in the recent presidential election in Paraguay. The public and press in Brazil bayed for blood and insisted that Bolivia and Paraguay be made to pay.So what did President Luis Inacio Lula da Silva do? “Look,” he said to his irate countrymen. “These are poor countries, and these are huge issues for them. They are our brothers. Yes, we are in our legal rights to be harsh with them, but we are going to show understanding and generosity, and so I am unilaterally doubling [in the case of Paraguay] and tripling [in the case of Bolivia] the payments we make to them.” India could, and should, in my view, similarly show the generosity of spirit which is an integral part of being a truly great power and good neighbor.

Third, this should translate into an invitation to Pakistan to explore ways in which the principles of the Indus Waters Treaty could be respected, while providing a win for Pakistan (assurance on their flows) and a win for India (reducing the chronic legal uncertainty which vexes every Indian project on the Chenab or Jhelum). Fourth, discussions on the Indus waters should be de-linked from both historic grievances and from the other Kashmir-related issues. Again, it is a sign of statesmanship, not weakness, to acknowledge the past and then move beyond it. And finally, as a South African I am acutely aware that Nelson Mandela, after 27 years in jail, chose not to settle scores but to look forward and construct a better future, for all the people of his country and mine. Who will be the Indian Mandela who will do this – for the benefit of Pakistanis and Indians – on the Indus? Gordon McKay is a professor of Environmental Engineering at Harvard University.