‘We owe it to our future generations’ 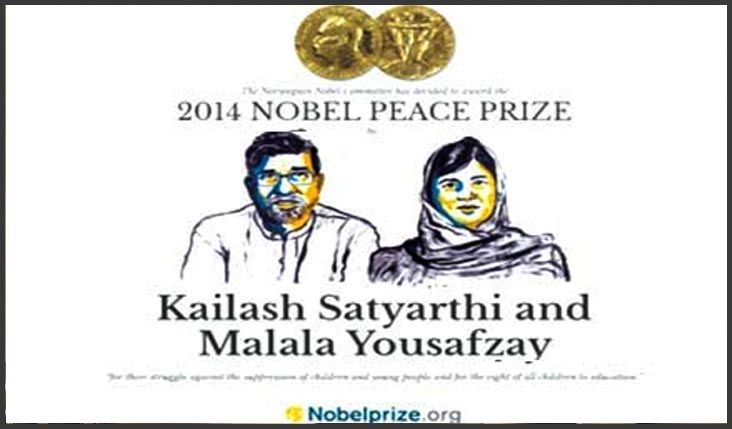 The Nobel Peace Prize being jointly awarded to a Pakistani and an Indian obviously cannot by itself bring peace to our two countries, but the gesture has great symbolic value and can, and should, be used to leverage for better relations. This was underlined at a recent seminar in New York, jointly organised by a Pakistani and an Indian organisation.

Titled “Possibilities of peace in the wake of the Kailash-Malala Nobel win”, the seminar was put together at the last minute as a side-event, by Dr Amna Buttar, a founder-member of the Asian-American Network Against Abuse of Human Rights (ANAA), together with the Association for India’s Development (AID).

ANAA is a volunteer organization that aims to initiate public debate, and highlight the legal, social and psychological conditions that lead to human rights abuses in Pakistan. AID is a volunteer movement that promotes sustainable, equitable and just development, in solidarity with non-violent people’s struggles and grassroots organizations in India working on interconnected spheres including agriculture, education, livelihoods, natural resources, health, women’s empowerment and social justice.

Speaking at the event, Dr. Buttar noted that this was “a unique collaboration”. She has lived in the USA for several years, and has been to events by Indian organisations attended by Pakistanis, and to events by Pakistanis that Indians participated in. “But this is the first time that I am attending a function that is jointly hosted by an Indian and a Pakistani organisation.”

Semonti Sinharoy, President, AID New York, agreed, saying she was happy to be part of this joint event and to jointly celebrate the Nobel Peace Prize win of Malala Yousafzai and Kailash Sathyarthi for their struggles against injustice and for the right of all children to education and to strategise together on keeping the momentum for peace.

Dr Buttar proposed the launch of a signature campaign urging the Prime Ministers of India and Pakistan to accept the Nobel Peace Prize winners’ invitation to attend the awards ceremony in December this year. Participants of the seminar unanimously endorsed the suggestion.

Many well-wishers provided moral support for the event, like Dr Buttar’s colleagues at the Association of Physicians of Pakistani descent of North America (APPNA), as well as the New York-based labour leader Biju Mathew, and the Washington DC-based journalist Khawar Mehdi Rizvi of the South Asia Free Media Association. The event in fact took place on the sidelines of APPNA’s annual fall meeting, due to which a room was made available at the last minute.

“We owe it to our future generations,” said Dr. Amna Buttar, founder President ANAA, stressing the need to advocate for peace between India and Pakistan.

Geetu Ambwani, AID NYC Overall Project Coordinator also stressed the need for the diaspora to “give back” and connect with the grassroots movements at home.

Speakers at the two-hour long event paid tribute to the Nobel Peace Prize winners and discussed their work in the socio-political context of the region.

The attack on Malala was not just on girls and education but also a “broader attack on progressive forces and those standing up to the Taliban,” commented Pir Zubair Shah, an investigative reporter from North Waziristan who has worked with The New York Times and interviewed both Malala and her father.

“In 2009 when I was looking for someone in Swat who would openly speak against the Taliban, Ziauddin Yousufzai was the only who agreed,” said Shah.

He noted that it is not only madrassah students who become militants. One of the men who attacked Malala was from a ‘regular’ school. “We have to remove hate material about other religions and countries from the syllabus,” said Shah. “I myself grew up hating people of other religions, especially people from India. We must stop injecting religion into politics and radicalising our young generation.”

Harshavardhan Purandare, an “IT activist”, works with Asha for Education, founded by Dr Sandeep Pandey who won the Magsaysay Award (known as the “Asian Nobel Prize”) in 2002. He stressed the need for Right to Information (RTI) and talked about how engaging with RTI has empowered people in the underprivileged and rural areas where Asha works. “We have to close the information gap,” he said.

He said that movements taking up civil rights issues like child rights, and various other rights, like the right to employment, food etc should address these issues keeping the perspective of information and the digital divide in society as a central focus. We need to create more focused virtual social networks that lead to real action to mitigate human right violations and contribute to the peace process between India and Pakistan”.

Dr. Shahnaz Khan, Founder President, Rise for Pakistan, a youth-oriented organisation that the singer Jawad Ahmad also spearheads, underlined the importance not just of universal education but also “equality of education” and the need to end exploitation in society.

Migrants to countries like the USA often subsume their narrow national identities into a larger identity – ‘pan-nationalism’ – positioning themselves as ‘Latinos’ or ‘South Asians’ or ‘desi’, said development economist and social scientist Dr. Daniel Naujoks in his keynote address, “Borders, Nations, and Peace in South Asia: Social Norms and Diverse Societies”. A fluent Urdu/Hindi speaker, he is also a volunteer learning coordinator for AID NYC.

By taking on broader identities, they counter the presumption that people can be neatly categorised, as the Nobel awarded economist Amartya Sen has pointed out, said Dr Naujoks. This can shape the narrative further, because migrants do help influence their home countries.

Dr Naujoks, who teaches at Columbia University’s School of International and Public Affairs and at The New School also talked about the two important dimensions of “piece”. The negative definition is that peace is the absence of war. But the positive definition is that of a peaceful society that upholds human rights.

Two acclaimed progressive poets shared their work. Irfan Malik read his Punjabi poem “Pul” (Bridge), written after a visit to Patiala, India, some years ago at a time of tension between the two countries, when, contrary to expectations, people he met there received him with great warmth.

Hasan Mujtaba read his Urdu poem about the Taliban and their atrocities, rendered in simple but powerful language.

I feel privileged to have been invited to moderate the seminar, which featured speeches and poetry around the theme of peace, education and human rights. Although audio-visual equipment could not be arranged due to the last minute nature of the event, it was nice to see that people had the Aman ki Asha anthem on their cellphones. Gulzar’s immortal words ended the evening: “Nazar mein rehte ho jab tum nazar nahin aatey…”

Balraj Sahni: the 'Pindi connection The urge to express ourselves