Where India falls in love with Pakistan, again and again 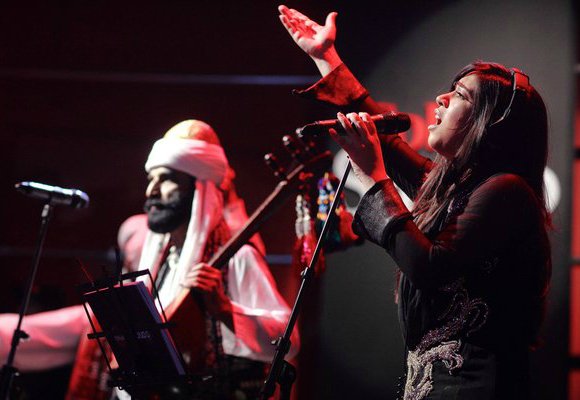 As Coke Studio Pakistan unveils in 14th edition, a Pakistani singer-songwriter shares her personal analysis of what makes this marriage of traditional with modern music instruments and recording technology such a hit in India

I first visited India in the fall of 2009, when my cousin Haniya and I landed in Mumbai. Despite no more than a single contact in the Indian music and film industry, no plan and nothing beyond plenty of aspirations, we had decided to make a quick trip to the fabled city of dreams.

On our first night in Mumbai, we found ourselves in the hip suburban neighborhood of Bandra. Our crumpled shalwar-kameezes, heavy backpacks, and tentative steps in made us feel completely out of place. But it wasn’t long before we realized that people recognised us in this exciting foreign land. It was our first big embrace from a world we knew little about.

Hours later, we walked out with our phones filled with numbers of people from the industry and numerous invitations from new friends. And just like that, everything changed. We had made it in Mumbai overnight. All thanks to the phenomenon called Coke Studio.

A year later, we collaborated with Shantanu Moitra and Swanand Kirkire to record an album post the success of our track ‘Kya Khayal Hai’. Four years later, we recorded ‘Sooha Saha’ for the Alia Bhatt-starrer Highway with my childhood hero A. R. Rahman. Both these amazing opportunities came our way because these iconic musicians had loved our performance of ‘Paimona’ in Coke Studio Season 2.

Having been a part of Coke Studio from its early days, I had witnessed the show’s evolution. Performing artists those days in Pakistan were undergoing a lot of angst springing from the war on terror and its backlash on cities. After live concerts were targeted, performances had dwindled.

Around the same time, a prominent media giant acquired 80 per cent of Pakistani band music, but decided against releasing more than 10 per cent of their catalog. There was fear amongst all of us musicians that our collective creativity would fade into oblivion. A void had been created.

In stepped Coke Studio to give a struggling local industry a world stage.

Everyone on the show was deeply invested in giving it their utmost. It was an emotional time and there was a sense of working for something far more than a corporate music series. We had a higher purpose of retrieving, expressing and re-establishing our music.

This was a time when music shows on Pakistan TV were sparse and mostly pre-recorded songs were mimed on-screen, which dampened a band’s spontaneous energy and chemistry. And here was Coke Studio, recording music live on the floor.

A lot of the sound that created the brand loyalty for Coke Studio, I believe, is specifically Rohail Hayat’s aesthetic.

He made a signature sound for the programme by fusing influences, specifically psychedelic rock and progressive blues, with local songs from various genres. He carefully crafted the process and curated the house band to be his central team to create this sound and make it work.

The songs came about through a series of live jams with the singer and the house band, always directed by Hayat. And they were then presented and recorded on the floor in the same format. The end product was, thus, primarily free of any trappings of glamour and commercialism. Instead, it felt honest with music taking center stage because that’s how it was conceived and executed.

This process is what I believe made it stand out in the otherwise overproduced and shiny soundscape in the region. The relatability made audiences all over India take special note of it.

Indian songs are mainly associated with films or actors. Due to the massive success of Bollywood music worldwide, the Indian pop industry has found itself playing second fiddle to film music. The idea of singers and musicians as stars in their own right and being unapologetically visually present struck a chord with the artistic community in India. Coke Studio emerged as a metaphor for creative freedom.

Of course, this would have been impossible without YouTube and the thickening internet cables that amplified digital connectivity in India and the region. As a result, Pakistani music finally became accessible and easily shareable without intermediaries. For the first time, Indian audiences had direct access to Pakistani content. Moreover, people could engage through comments with the show and other Pakistani viewers.

This relatability worked to create a magical perception around the platform because the Indian impression, till then, was influenced by exaggerated narratives about Pakistan. Also, while Pakistanis were watching Indian movies, with their content freely available on cable and satellite channels in Pakistan, there was no reciprocal access to popular culture originating from Pakistan for Indian audiences.

Indians were surprised to see this unexpectedly high-quality music platform. And that, to me, heightened the Indian curiosity and validated their love for the content. Historically, in the imagination of the Indian audience, there has been a romance with Pakistani music and TV serials. With Coke Studio, those memories reappeared in a new contemporary avatar.

I don’t believe Coke Studio, Pakistan, and the MTV Coke Studio, India, should be compared, simply because they have very different contexts and purpose. The former is a platform and voice for artists, whereas the latter provides an additional aspect to an already thriving multifaceted industry.

It’s important to note that Rohail Hayat’s initial six-year production tenure established the unique Coke Studio sound which contributed to its appeal. The single producer format is not feasible for replication in India’s thriving music industry which has many prolific and famous music producers.

While Coke is a big multinational giant in India, Bollywood is much, much bigger. In India, Coke Studio competes with a giant called ‘Indian films’ for one of the largest markets in the world. For Pakistan artists, Coke Studio is a musical catharsis.

Almost a decade-and-a-half later, it warms my heart to see that the phenomenal connection Coke Studio Pakistan established with India through music and digital accessibility continues to deepen. It’s just such a delight for us musicians and music lovers in both countries.

This piece was originally published in The Times of India, 28 January 2022.