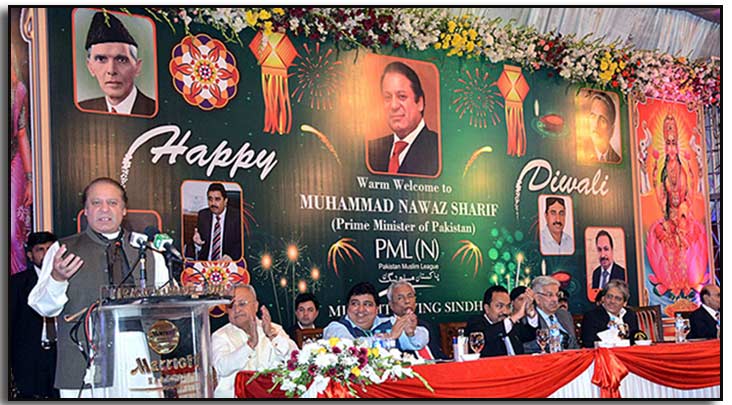 Nawaz Sharif addressing the gathering: underlined he is prime minister of all communities.

Whether due to political expediency or an attempt to change the narrative, the Pakistani leaders’ Diwali statements and actions are a welcome move

In an inherently adversarial political culture, very rarely do rival Pakistani politicians speak in one voice. Diwali was one such rare occasion when leaders of three top political parties, including Prime Minister Nawaz Sharif, echoed each other in supporting minority rights at separate festivities.

Sharif flew to Karachi on Wednesday to take part in Diwali festivities amid war of words with military establishment after it put him under pressure again by publicly ticking him off over tackling terror.

An unfazed Sharif spoke passionately about minority rights, insisting all religions in Pakistan enjoyed equal rights while pledging to safeguard them at a function, where Gayatri Mantra was recited along with the Quran.

He told Hindus he will stand by them if they are in distress. “Even if a Muslim commits an injustice, I will stand with the victim,” said Sharif.

Sharif underlined he is prime minister of all communities. “Minorities are part of Pakistan and it is my duty to protect them,” said Sharif, who became the first prime minister to attend Diwali festivities.

He said he had long been asking his Hindu friends to invite his for Holi festivities. “Do invite me and splash colour on me.”

Sharif called Diwali a celebration of struggle against evil while announcing the construction of a hospital named after spiritual leader Bhagat Kunwar in Hyderabad (Sindh).

His arch-rival, Imran Khan, promised equal citizenship for minorities at a rally amid fireworks in Hindu-dominated Umerkot a day after Diwali.

He said treatment of minorities would be exemplary in the ‘New Pakistan’ he promises to build. “We will take such care of minorities; make them equal citizens that Narendra Modi would be ashamed of himself over what is happening in India,” he said amid loud cheers.

Bilawal expressed happiness that every house was lit up with diyas for Diwali while claiming religious freedom and harmony was being destroyed in India.

He said the PPP considers Diwali as its own festival, but Modi does not even celebrate Eid while assuring his party would not discriminate on the religious basis. “We will continue to celebrate Eid and Diwali together, all under the flag of the PPP and the flag of Pakistan.”

The outreach comes ahead of next week’s local bodies elections in Sindh; where over 90% Pakistani Hindus live.

Most of the Hindus are concentrated in Umerkot (49%), Tharparkar (46%) and Mirpurkhas (33%). The Hindu population varies from 8-19% elsewhere in Sindh, where PPP rules and counts Hindus among its committed vote bank.

In Tharparkar alone, 500 Hindus are contesting the elections and Bilawal made it a point to ask voters to vote for his party.

Bilawal even likened his rival in the region, Arbab Ghulam Rahim, to Ravan while promising to rid the region of his influence and celebrate Diwali again when the election results would be announced on November 19.

Political expediency aside, journalist Beena Sarwar, a lifelong champion of minority rights, termed the outreach as part of the efforts to change the narrative, which threatened to tear apart the country before an apparently successfully ‘Zarb-e-azab’ operation was launched to root out extremism in 2014.

Sharif has his work cut out as minorities face myriad problems, including negative portrayal in textbooks that ends up othering and promoting ill will against them.

Javed Bashir: My family would always recount their happy memories of India 'You speak Urdu but I hear Hindi'