Why is Gopal Das free and not Khalil Chishty? 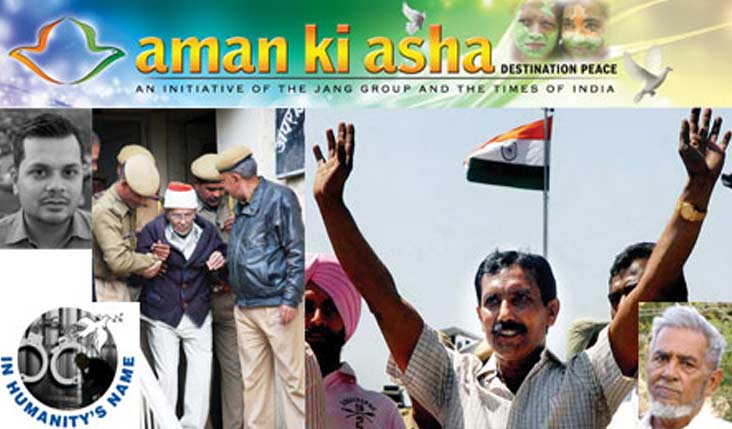 In an unusual order of March 2011, the Supreme Court of India quoted William Shakespeare and Faiz Ahmed Faiz to appeal to the Pakistan government to pardon and release Indian prisoner Gopal Das. Pakistan President Asif Ali Zardari signed the papers within days, ahead of Prime Minister Yousaf Raza Gilani’s visit to Mohali to witness the cricket World Cup semi-final between India and Pakistan with his Indian counterpart.

On April 7, Gopal Das crossed into India. Some in Pakistan had opposed his release, arguing he had some months left to complete his sentence and should not be shown mercy because he had been found guilty in 1984 by a Pakistani military court on charges of being an Indian spy.

He and his family claimed that the charges were false, and wanted him pardoned because now aged 52, he had spent the last 27 years in Pakistani prisons.

When Amna Chishty read about Gopal Das’ case, she wondered why India could not show similar mercy to her father, lodged in an Ajmer jail. Like Das, Dr Khalil Chishty had spent 19 years away from his family in Karachi. Like Das, Dr Chishty’s family claims he was innocent, wrongly convicted for a murder. Moreover, the main accused in that case have been given pendency bail; Dr Chishty was not, only because he is a Pakistani.

In April 2011, Aman ki Asha and the People’s Union of Civil Liberties started a campaign to have Dr Chishty pardoned. It took Pakistan three weeks after the Indian Supreme Court’s appeal to send Gopal Das home. It has been over nine months since the campaign to free Dr Chishty began.

There are many reasons why the case for pardoning Dr Chishty under Article 161 of the Constitution of India is even more compelling than that of Gopal Das.

Firstly, unlike Das, who is in his early 50s, Dr Chishty is about 80 years old, disabled and bed-ridden. Ajmer jail authorities have to take him for a daily blood pressure check to the hospital, where he is allowed rest every few hours. His declining health is not mere old age. In March 2010 he fell from his bed and broke a hipbone. On the operating table for the surgery required to fix the fracture, he suffered a heart attack. Doctors had to attend to the heart attack, leaving him with an unhealed fracture that has left him unable to walk.

None of this impresses Patil. When sending the mercy petition back to the Rajasthan government on July 4, he had several questions to ask. Amongst them: is he really as ill as he claims to be?

The second reason that makes Chishty’s case more compelling than Das’ is that while Das was convicted of spying and committing acts against the Pakistani state, Chishty is not accused of harming the Indian state, its integrity or sovereignty. Das was found inside Pakistan without a visa; his family claimed he had unknowingly strayed into the border. Chishty was visiting his ailing mother when he was trapped in a family fight.

He is convicted for a murder in which he is not even the main accused. His family was embroiled in a family feud with some relatives. Two police constables were posted on the street to guard the house against an attack. However, the rival party climbed onto the roof, and in the ensuing fracas, Dr Chishty’s nephew, then a minor, pressed the trigger in self-defence. One of the attackers was killed. The other attackers were later convicted.

Dr Chishty’s nephew, who admits using the gun in self-defence, says Dr Chishty was framed, as the other side knew that, once named in the FIR, he would not be able to return to Pakistan.

The circumstantial evidence against Chishty is flimsy; his tobacco pipe and lighter found on the terrace were seen as proof that he was there when the murder took place. His family says he had hidden downstairs when the attack began. The police constables guarding the house have also testified that he was not on the roof when the attack took place.

The Rajasthan high court upheld Dr Chishty’s conviction and the case is all set for the Supreme Court now. Even presuming that he did indeed commit murder, hasn’t he been punished enough for it? The murder took place in 1992, over 19 years ago. During those years, until he was convicted in January, he was on a virtual prisoner.

After some time in prison, he requested to be allowed to stay in an ancestral farmhouse on the outskirts of Ajmer, to be away from family squabbles. Although not technically in prison, he was not a free man. He lived under surveillance, his phone calls and visitors monitored. This eminent virologist spent his retirement thus away from his wife and children.

His daughter Amna Chishty wrote in a moving public appeal, “During this time he missed two of his daughter’s weddings, the birth of nine of his grand-children and the house and library he had made for his retirement. He was forced to swap this with a lifestyle, which eventually made him emotionally, physically and financially bankrupt.”

Justice Markandey Katju, one of the two Supreme Court judges who had appealed to Pakistan to release Gopal Das, wrote to the Indian prime minister and the Rajasthan governor in his private capacity, saying it was time to return Pakistan’s favour. Patil did not even give Justice Katju the courtesy of acknowledging his letter. Justice Katju has also written to Congress President Sonia Gandhi. Eminent Indian citizens like Kuldip Nayar, Mahesh Bhatt and Admiral (rtd) Ramdas have appealed for his release, but Dr Chishty is still in jail.

Ravi Shankar Prasad of the Bharatiya Janata Party, in opposition in Rajasthan, objected to Justice Katju’s appeal saying that he should work for the release of Indian prisoner Sarabjit Singh from Pakistan.

Sarabjit Singh’s death sentence in Pakistan, awarded for his alleged involvement in bomb blasts in Lahore and Multan in 1990, has been commuted to life imprisonment.

Amongst other things, what comes in the way of the campaign for Sarabjit Singh’s release is that India is not releasing Dr Chishty even though Pakistan had pardoned Gopal Das. Such lack of grace and reciprocity on India’s part affects the life of every Indo-Pak prisoner.

It also doesn’t help Sarabjit Singh’s case that after kissing Indian soil and hugging his family in April, Das immediately declared he had indeed been a RAW agent betrayed by Indian officials.

The Rajasthan government replied to Patil’s questions in October. This time, as per the Constitution, he cannot return the file. He can keep it pending, which he is doing. One of his queries was why the trial took 19 years. Does a former Union home minister really find it unusual that a murder trial in India can take 19 years? This suggests he had long ago made up his mind to let Dr Chishty die in jail.

Some members of Dr Chishty’s family were in India in November to meet him and to appeal for his release. It was an emotional reunion. Dr Chishty could not recognise his grandson Ali Chishty, now a young man, whom he had last seen as a child. Dr Chishty met them as though this would be the last time. He said that everybody, the judiciary, the government and the media, were waiting for him to die.

If Dr Chishty dies in jail not only will it be a matter of shame, it will also be a setback in bringing home many Indian prisoners in Pakistan. Governor Shivraj Patil should spare a thought for Sarabjit Singh and his family, and the plight of every Indian in Pakistani jails, and then ask his own conscience what is the right thing to do.

Shivam Vij is a journalist based in Delhi.
Email: [email protected]. A slightly different version of this article was originally published in Rediff.com

Coming Up.... Jagjit Singh, up close