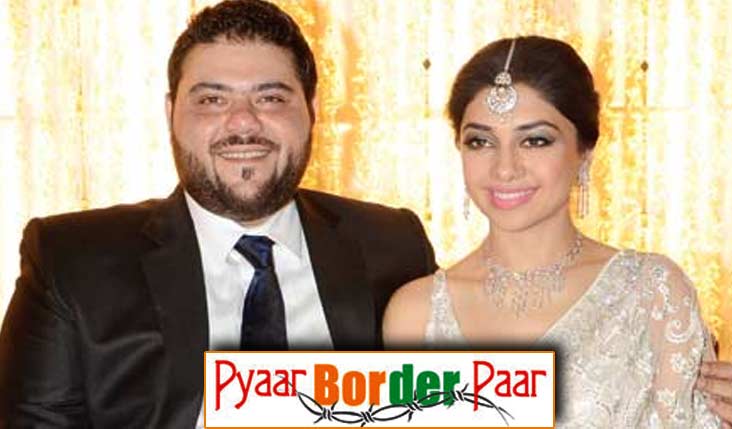 The first of a series chronicling five vibrant cross-border couples, stories that transcend squabbles over cricket or Kashmir. Readers are welcome to share their own stories across the divide
By Laaleen Khan

She is an Oxfordian, lawyer, pop musician and retail entrepreneur from Lahore. He is an established restaurateur and entertainment producer from Mumbai. It didn’t take them long to realise that they were meant to be together, after meeting through mutual friends while she was visiting India some time back.

“It took a couple of more meetings for me to realise that she was a very special woman, far above the ordinary,” recalls Riyaaz.

“Riyaaz has a very disarming and charismatic personality,” says Kiran. “It’s hard not to fall under his spell.”

And so Kiran Chaudhry and Riyaaz Amlani celebrated their wedding in India and Pakistan last December. Like-minded, sociable, industrious and expansive, they enjoy flitting between Mumbai, Delhi and Lahore.

Riyaaz proposed to Kiran in Bandra’s picturesque Christian quarter, Mumbai. “He showed me an old, deserted building with a sign that said ‘St. Jude’s Bakery.’ He asked if I knew that St. Jude was the patron saint of lost souls, and told me that this was where he was planning to build a home. And while I was mulling all this over, he suddenly went down on one knee and took out a little box! It was the most magical night of my life!”

Kiran’s family also fell in love with her fiance traightaway. Her father is a distinguished member of the Lahore Police with pre-Partition ancestry from Patiala via Multan, while her maternal roots lie in Kashmir. “They were initially a little concerned that I would be moving to India and that there might be visa issues but when they met Riyaaz, all of those concerns fell away.They are so happy that I have found someone who is so right for me. I think it offers a far richer experience to be able to live and work in more than one country.”

Riyaaz is of Muslim and Parsi heritage; his father is a chemicals industrialist and his mother a housewife. He was “blown away” by the “hospitality, generosity and love” shown by people he met in Pakistan. “It is truly a special place. We are the same people, right down to our language and culture. As for my parents, they were both overjoyed.they thought I would never get married, being so involved with my work and all. But when they met Kiran, they were just over the moon. I haven’t met anyone who doesn’t instantly warm to her.”

Kiran feels “blessed” to have met Riyaaz. “It was most definitely destined. Riyaaz is an extraordinary human being. He is generous spirited, has tremendous vision, is a true champion of women and is constantly open to growth as a person. To other couples, I advise, go for it. There is so much to learn from each other and bring to each other’s countries.”

Despite endless paperwork, the two have generous praise for their respective High Commissions who assisted them in bringing close to a hundred guests to and from their nations. “The officials at the Pakistan High Commission went out of their way to assist us. Even at the border, the officers on either side almost joined in the celebratory mood and were wonderfully helpful and hospitable. This made the border crossing a very special experience,” says Riyaaz. For Kiran, “the Indian Embassy staff was incredibly helpful and understanding. They called me ‘India ki bahu’ and assured me that my wedding plans would go smoothly.”

Kiran jokes that she has adopted the Indian headshake which can “simultaneously means yes or no” while Riyaaz has added ‘yaar’ to his most frequently-used slang. When it comes to cricket, they are firmly diplomatic.

Laleen is an Islamabad based media specialist. This piece is adapted from her series ‘When Hari Met Saleeha’, originally published in Libas International; [email protected]
[email protected]