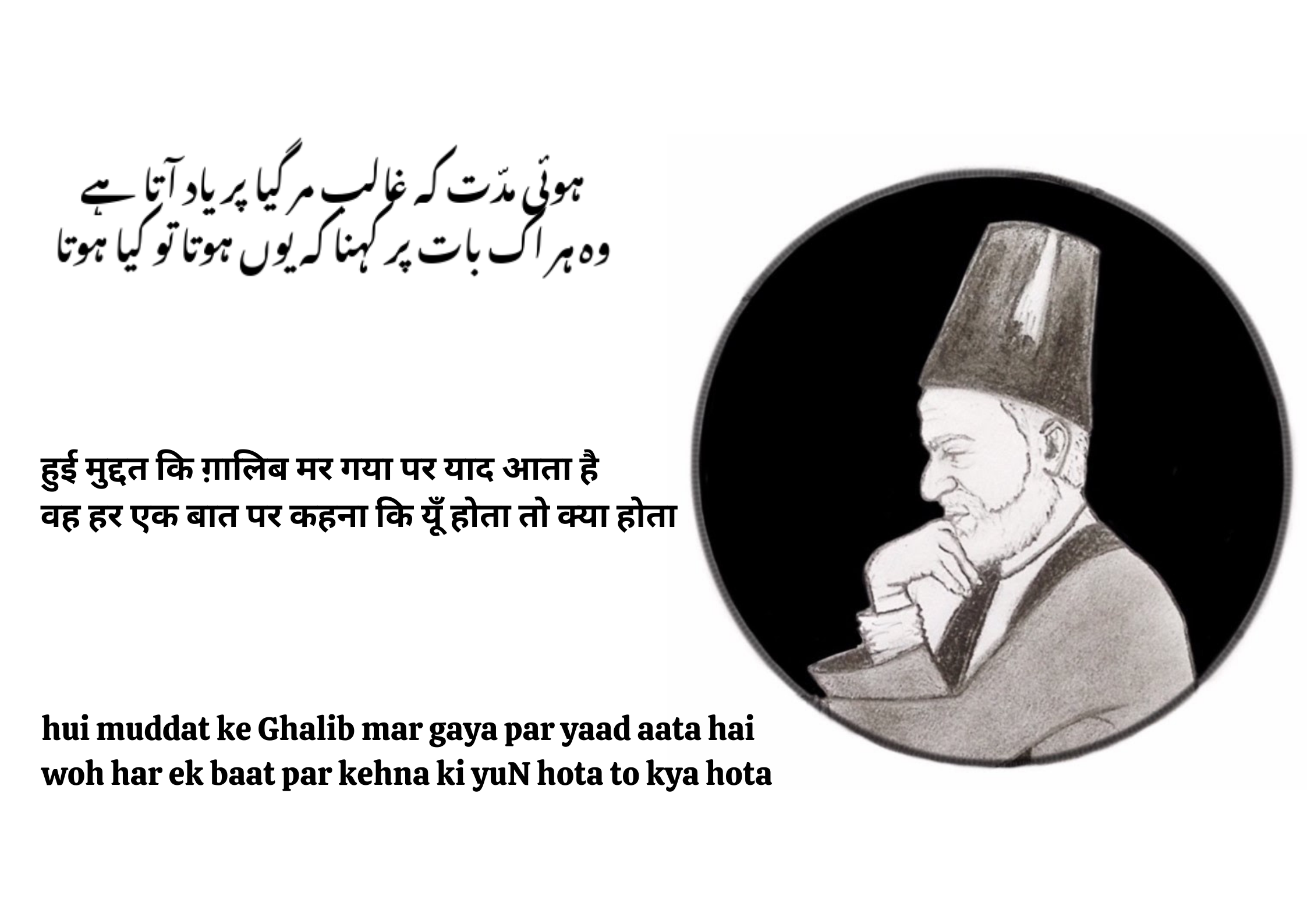 Anjum Altaf and Amit Basole share the story behind their book Thinking with Ghalib: Poetry for a New Generation, recently published in Lahore and Delhi

It was 2008. Two Southasian scholars were each engaging with Ghalib in different ways, unknown to each other.

Then based in Washington, DC, Anjum had just read an article on Milton’s 400th birthday by the noted Milton scholar, Stanley Fish, on how he used Paradise Lost to get undergraduates to think about all the big issues in life. It struck him that he could use Ghalib in the same way for students in South Asia. This culminated in an essay, Milton and Ghalib, on his blog The South Asian Idea.

Amit was then based in Amherst, Massachusetts. He had been introduced to Ghalib in the late 1990s as a Masters student in Mumbai, by a senior from Kashmir. A few years later he discovered Desertful of Roses, a  labour of love by Columbia University professor Frances Pritchett. This inspired him to write his own interpretations on his blog Mehr-i-Niimroz (the noonday sun).

Their collaboration over the years on developed into this latest venture, Thinking with Ghalib: Poetry for a New Generation, a collection of 30 couplets with translation and commentary, published by Folio Books, Lahore, and Roli Books, Delhi. But it took time. Anjum retired and picked up the thread in Lahore, by which time Amit was in Bangalore, cities they have each visited but when the other was not there.

They also know each other’s languages – Anjum knows Hindi, Amit knows Urdu, and both know a little Farsi. And yet the first time they came face to face was in 2020, “meeting” virtually in “the Brave New World of Zoom and Google Meet”.

“That the book is a reinterpretation of 30 of Ghalib’s couplets (ash’ār) is only half the story; its essential purpose is to make the reader think with Ghalib and the very soul of Ghalib’s poetry is doubt, doubt all received wisdom, even as he is actually immersed in the encompassing culture of received wisdom,” writes historian and trustee of the Ghalib Insititute, India, Harbans Mukhia in a piece for The Wire, ‘‘I Doubt, Therefore I Am’: Revisiting Mirza Ghalib’s Poetry, 01 Jan. 2022.

We discovered each other and our shared interest by accident, thanks to the networks spawned by the Internet. A 2008 post titled Ghalib says – 2 in The South Asian Idea shares how the Milton and Ghalib post led to a partnership with Mehr-i-Niimroz.

“Every week or so we will together select a couplet from Ghalib: Mehr-i-Niimroz will provide a translation and commentary; The South Asian Idea will use the couplet to pose questions and start a discussion. The objective will be to explore how much we can learn from Ghalib about the world we live in”.

In hindsight, this turned out to be a productive collaboration. We continued doing the very different things that interested us but around a shared couplet. We stopped after we had done 30 by which time it became obvious that what we had could be turned into quite a unique book.

Unique, because no one before had used Ghalib in quite this way, moving away from aesthetic appreciation to intellectual analysis, to interrogate both universal questions and our contemporary realities starting from indigenous cultural and historical roots.

Because we were not scholars of literature, we did not feel constrained by the conventions of Ghalib studies and could take a lot more liberties with our subject. We had put Ghalib to use, dragging him into the 21st century and putting him in conversation with students who were either unaware of this amazing intellectual resource or unable to fathom it.

It helped that Ghalib was such a witty, playful, and mischievous companion bent on turning all conventional wisdom on its head in the most casual and light-hearted manner. All he needed was the right introduction and we could leave it to him to work his magic.

All that notwithstanding, the book had to wait till 2020 because life came in the way although the idea remained alive throughout the intervening years.

Although the Covid-19 pandemic has wrought untold misery across the world, it has also brought us closer together. We have still not shaken hands, when Thinking with Ghalib is out from both Lahore and Delhi. However, we have participated virtually in discussions around the book in Pakistan and in India, most recently, at the Bangalore Literature Festival last month. There ensued a wonderful conversation with Shabman Virmani, on the affinities between Ghalib and that other challenger of conventions and boundaries – Kabir

Paradoxically, though, now it feels even stranger that we have never met in person. But the powerful bond built around shared interests and ideas is as strong as ever. We know each other’s languages. We have ownership of a truly rich heritage that cannot be divided by a line on the ground and both carry a tremendous desire to share it with the world.

It is still difficult to believe what we have been able to do together now that the book exists and is being passed from hand to hand. It is just the nature of thoughts and desires that they can escape all the constrictive nets devised by human beings.

Anjum Altaf is a South Asian living in Lahore. He is the author of Transgressions (2019) and More Transgressions (2021) both volumes of poems inspired by Faiz Ahmed Faiz. Amit Basole teaches Economics at Azim Premji University, Bangalore. Urdu poetry as well as history and architecture of the Indian subcontinent are his passions. This feature edited by Beena Sarwar is free for re-publication with credit to Sapan News Service, www.southasiapeace.com.

Where India falls in love with Pakistan, again and again Pakistan grants visa to Sika Khan; brothers separated in 1947 to visit in Pakistan village