‘You speak Urdu but I hear Hindi’ 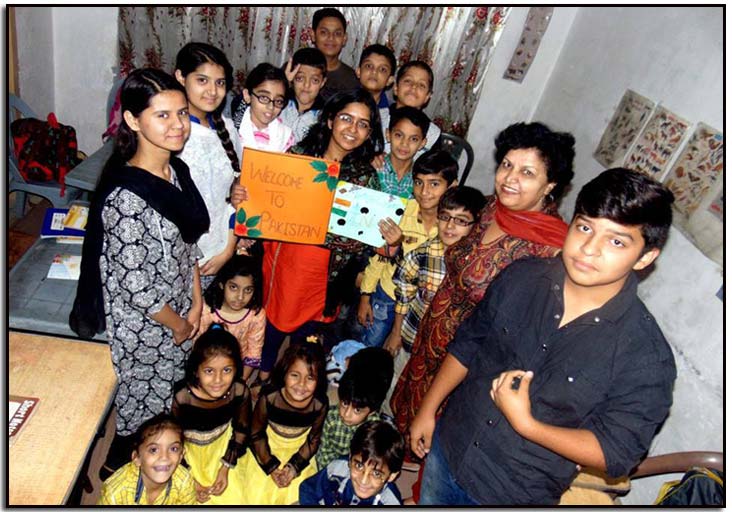 The session was held on Nov 4, with students of Excellent Education Centre (EEC), and was coordinated by Namra Nasyr, Lahore coordinator of Aaghaz-e-Dosti and Wasiqa Khan, teacher and apprentice at EEC.

This was the 16th Aman Chaupal (peace session) organised by Aaghaz-e-Dosti, a joint Indo-Pak initiative of Mission Bhartiyam, India and The Catalyst (TC), Pakistan. Aman chaupals involve individuals from across the border or who have visited the other side, talking to students in the other country.

Aaghaz-e-Dosti had earlier connected EEC students with students of Ecole Mondiale World School in Mumbai, with an exchange of greeting cards on India and Pakistan’s Independence Days.

The session began with students presenting welcome cards to the guest. In response to their questions, Devika Mittal talked about the earlier exchange of cards – students had been excited about getting cards from across the border. The excitement was captured on a video made by Aaghaz-e-Dosti’s Lahore coordinator.

In response to a question about the differences she found in Pakistan, Devika Mittal said that she did not feel that she was in a different country. People did not identify her as Indian unless she herself told them where she’s from. She said that we look, dress and speak in similar ways even though Punjabi is spoken more in Lahore than Urdu. Similarly, Pakistanis visiting India are also often not identified as Pakistanis unless they say where they are from.

Asked about the difference between Hindi and Urdu, Devika Mittal replied, “It is interesting that you people are speaking Urdu but I am able to hear Hindi and I am speaking Hindi but you are hearing Urdu. This shows that there is hardly any difference. The script is different. There are also some particular words that can distinguish but overall, there is no easily noticeable difference.”

“Are there only Hindus living in India?” asked a student.

Devika Mittal replied that like Pakistan, India is a religiously diverse country. Hindus are in majority but Muslims form the largest minority. There are also Christians, Sikhs, Buddhists, Parsis, Jews and other religious groups. India also legally recognises agnostics and atheists or people’s right to not have any religion.

When she asked if they watch Indian movies, all the students raised their hands, and shared the names of their favourite Bollywood actors.

The discussion included more questions around similarities between India and Pakistan, about Indians and on popular culture. The students expressed their desire to come to India and meet with youth of their age.