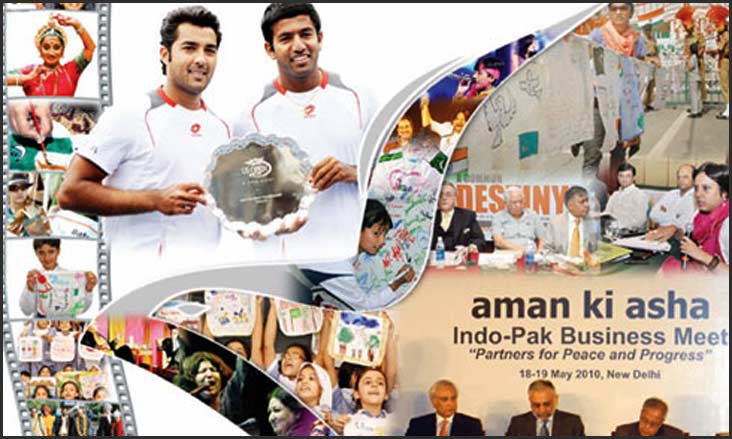 The concept of peace is a romantic notion and so, as expected, Aman ki Asha captured the imagination of the overwhelming majority of the people of both countries. But Aman ki Asha has delivered quantifiable results at the practical level too

The Aman ki Asha peace campaign jointly initiated by the Jang Group and the Times of India is one year old today. To my mind, this has been the most serious attempt at facilitating peace between India and Pakistan at any platform. The Aman ki Asha campaign has also been the most intense and extensive media campaign on any single subject in the last 60 years. It is also the first time ever that media in both countries have jointly campaigned for peace.

Never before were the complex and complicated disputes between the two countries so comprehensively discussed. Never before have Pakistan’s point of view on Kashmir and its concerns about the possible violation of the Indus Waters Treaty been so widely projected in mainstream Indian media.

Aman ki Asha organised serious dialogue on the most contentious issues by people representing official as well as civil society views. Some 300 Indian and Pakistani CEOs discussed the merits and demerits of trade and investment between the two countries at a two- day conference in New Delhi. The result was an emphatic yes both to trade and investment.

Coming together on this platform, CEOs of some of India and Pakistan’s biggest and best companies are discussing the nuts and bolts of how to leverage the skills and talents that abound in both countries. These efforts are expected to be of great mutual benefit. Collectively, we will become a far more powerful vendor while individually becoming more competitive in the international arena.

During this one year the Aman ki Asha campaign has done more to remove misconceptions and change mindsets than the combined efforts of the governments, NGOs and all other platforms were able to achieve during the last 60 years. And we have the facts and numbers to back that claim.

In an identical survey conducted in India and Pakistan by independent research agencies, perceptions about India and Pakistan have shown consistent – and in some cases dramatic – improvement. For instance, 87% of the Indians surveyed expressed the view that peace can be achieved through settling the Kashmir dispute – up from 75% before the campaign. The Indians have a more positive view than even the Pakistanis, where 77% held that view.

Two thirds of the Indians surveyed are hopeful that sustainable peace can be achieved in their life-time n 35% more than before the AKA campaign was launched. This hope is even higher in Pakistan, where many as 72% of the people surveyed expressed the same belief.

People in both countries felt that both government-to-government and people-to-people relations have improved since the campaign began. 90% of the Indians surveyed viewed Pakistan as a moderate to low threat to India; with 50% considering it to be a low threat. Since the Aman ki Asha campaign began, the threat perception has decreased by nearly 20% in India. In Pakistan 77% of the people surveyed percieve India as a moderate to low threat. 74% of Indians have expressed a desire for peaceful relations with Pakistan compared to 50% in December last year. The corresponding figure in Pakistan was 70% with 33% expressing a strong desire for peace.

While Aman ki Asha has received support and endorsement from all segments of the society, some people have also raised red flags. Some sections of the media have been critical of the campaign. We take the views of our detractors very seriously (except for that tiny minority known to be anti-peace which has attacked the campaign for the sake of criticism). Their apprehensions and suggestions are valuable feedback that we have incorporated in the Aman ki Asha initiative.

Except for minor hiccups here and there, both governments have facilitated the initiative, for which we express our appreciation and grateful thanks. We believe that the governments want to take the peace process forward and resolve all outstanding disputes in a fair and equitable manner. We hope that the facilitation we have received from the governments is indicative of their belief that Aman ki Asha is a platform seeking to do exactly that.

The tremendous positive change in perceptions, in every aspect of our relationship, bears testimony to the benefits accruing form the peace campaign. The AKA project was able to do what lobbyists and PR companies charging millions of dollars would not have achieved.

The survey in India shows that the terror perception relating to Pakistan has decreased from 75% — before the Aman ki Asha campaign was launched — to 42%. The perception that bomb threats and recent terrorist activity emanates from Pakistan has decreased from 54% to 29% and from 21% to 13% respectively during these 12 months since AKA was launched. Awareness in India of the Kashmir problem has more than quadrupled from 4% to 17% in the space of these 12 months.

We hope that the groundswell of goodwill that Aman ki Asha has created both in India and Pakistan will not only dispel any apprehensions about our motives, but that these results will encourage both the governments and civil society to further support it.

For over six decades, the people of Pakistan and India have been held hostage as much by the inexorable force of events as by the vested interests spewing hate and terror. The cost of conflict “both in terms of the actual expense as well as lost opportunities” is unaffordable. It is time to change the paradigm. The onus of leaving a better legacy for future generations lies squarely on our shoulders.

Certainly, there are real and complex problems between our two countries, but these difficulties are not insurmountable. And they pale into insignificance against the cost we have already paid and the burden we continue to bear.

The dividend of peace is larger than the sum total of our disputes. Peace is a journey and Aman ki Asha may be just one step in that journey of a thousand steps. But with the support of the people of both countries, civil society, the business community and the governments, we remain hopeful of overcoming our problems and arriving at “Destination Peace”