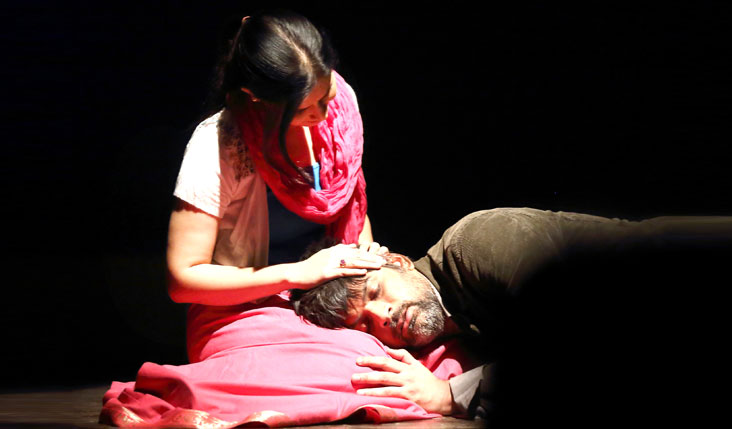 "Daddy": a scene from the play

The theatrical adaptation of film producer Mahesh Bhatt’s ‘Daddy’ will be staged at the forthcoming International Theatre Festival 2015 organised by the National Academy of Performing Arts, Karachi.

Delhi-based actor Imran Zahid, who had approached Bhatt with the idea of adapting his films into theatrical productions, stars in the lead role played by Anupam Kher in the film.

“Many great plays are often made into films so why not try the other way around? It is important to keep theatre alive,” Bhatt told reporters in Delhi last year when the play opened.

Danish Iqbal who directed the stage play “Daddy” is directing another theatrical venture backed by Bhatt, a forthcoming cross-border production inspired by Aman ki Asha. Titled ‘Milne Do’, with Imran Zahid in the lead role, the play is being produced in collaboration with Lahore’s Azad Theatre.

Pakistan-India Peoples’ Forum for Peace and Democracy (PIPFPD), the oldest and largest people-to-people movement in the region, will hold a seminar to commemorate its 20th anniversary.

Titled ‘Understanding Pakistan Today’, the seminar will be held in New Delhi on March 4 -5, 2015. The event, initially planned for December 2014, had to be postponed due to a delay in the clearance of visas for the Pakistani delegates.

Some two dozen senior Pakistani academics and social and political activists will present papers on a variety of subjects, that Indian delegates will formally discuss and comment on in order to engage with the complex dynamics of Pakistan’s contemporary social, economic and political reality.

“Four wars, continuing violence in Jammu and Kashmir and reports of intensification of fire-fights on the border have led many of our countrymen to believe that most Pakistanis want permanent war with India,” he says.

“There is also a growing perception that Islamic radicalism has become part of the lives of ordinary people of Pakistan. With the US and NATO forces poised to withdraw from Afghanistan there is fear of outbreak of massive ethnic and religious violence in Afghanistan which would spill over to Pakistan, destabilizing the region. The current impasse in the diplomatic and political dialogue in an environment of populist jingoism renders more volatile the management of local tensions and makes all the more important initiatives for deepening non formal people to people exchanges, especially amongst scholars.”