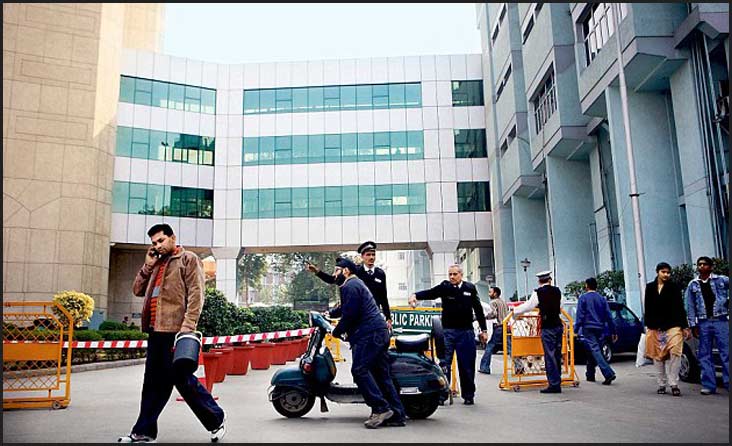 ‘This is the best Holi gift to me,’ said Pakistani liver patient after life-saving surgery at the Sir Ganga Ram Hospital in New Delhi enabled by 12 Indian students donating blood for him, reports daily Mail Online, in a widely shared story.

Aman Lal Makhija, 40, a Pakistani who was struggling for his life a few weeks ago, was saved when good Samaritans not only from his home country but also from India came to his rescue.

When his liver started failing Makhija, hailing from Pakistan’s Sindh province, was advised to go in for a liver transplant in India. He made the trip accompanied by a Pakistani donor, his brother-in-law Dilshad Ali.

When an urgent need for blood arose, Dilshad Ali pasted pamphlets near the hospital, asking people to donate blood for Makhija.

It caught the attention of a group of students preparing to take civil services examinations from a coaching centre in West Delhi. A group of 12 students came forward to donate their blood for Makhija.

Doctors Dr K.R. Vasudevan and Dr Abhideep Chaudhary, who operated upon the patient, said that due to the timely contribution of blood, the team was able to successfully perform a complicated liver transplant surgery on February 27.

Liver transplant patients are generally advised to arrange 10 units of blood in case of any eventuality. “But being from Pakistan, the family did not have any donors. The noble act of blood donation by these students really touched us all,” said Dr Vasudevan, a liver transplant surgeon.

Makhija, who runs a medical store in Pakistan, said: “This rebirth is the best Holi gift to me by Indian doctors and students.”

“There are about 400 Hindu families in our area. We have never faced any problems in Pakistan,” he said, appreciating the helpfulness of the people in India especially the students.

“The students even came to enquire about my brother’s health and have invited me to take part in Holi celebrations. My family will always remain obliged to them,” said the patient’s brother Jawahar Lal Makhija.

“The patient was suffering from Hepatitis –B infection for the last three years and needed an urgent liver transplant. We performed this surgery on February 27. A part of his bother-in-law’s healthy liver was transplanted in a 7-hour surgery. Both donor and recipient are fine now and will be discharged in a week,” said Dr Abhideep Chaudhary, a liver transplant surgeon.

“A Pakistani with Indian blood,” commented Karachi Bishop Dr Ijaz Inayat. “How would the hawks on both side decide the nationality of this man?”

Human chain for Holi in Karachi

NSF had along with the Pakistan Youth Alliance (PYA) earlier organised a show of solidarity with Shias at the Shah-i-Najaf Imambargah, attended by notables like Dr. Jaipaal Chhabria, President of the Pakistan Hindu Forum and lawyer and political activist Mohammad Jibran Nasir.

“When we showed solidarity with Shias at the Imambargah, Dr. Jaipaal Chhabria stood wit us so it’s only fair that as a group, we extend the same courtesy to Pakistan’s Hindus who face various kinds of persecution,” said Fawwad Hasan, NSF General Secretary Karachi.

A banner with a draw

‘Milne Do’: India pavilion at the Mega Leather Show, Lahore

“Visited the Mega Leather Show at the Expo Centre, Lahore. Pleasantly surprised to see the Indian stall. Although it did not have things of my interest I just visited it for Aman ki Asha,” commented Okara-based Mian Hussain Ahmed in the Aman ki Asha Facebook group. He is pictured in this photo taken by his son and posted to the group on March 8.

“The only thing that interested me was the panaflex banner displaying a handshake between the two neighbouring countries which is the aim of our group (Aman ki Asha)”.

Crediting Shoaib Akhtar for bringing back rhythm in his bowling, Indian medium pacer 24-year-old Mohammad Shami has said the former Pakistan speedster advised him to shorten his run-up, which has helped him increase his pace, says a Press Trust of India (PTI) report from Perth.

“The recent change in run-up has surely increased my pace. So I am continuing with it and hoping that it pays rich dividends. I did have a chat with Shoaib (Akhtar) bhai and he suggested that I should reduce my big strides. So shortened my stride and it has worked. It (the new run-up) is smooth and comfortable and it has also increased my pace,” Shami said in a post-match chat on Star Sports.

Shami, India’s leading wicket taker in the World Cup so far with nine scalps in three games, returned to action against West Indies after missing a game due to a niggle, bagged three wickets at the WACA to help table-toppers India register their fourth straight win and book a quarter-final berth from pool B.

The Bengal medium pacer said he will not make any more changes to his action or strategy while in New Zealand for their final two games of the league… Very happy with how things have panned out and will just focus on my line and length and would like to continue my good work,” he added.