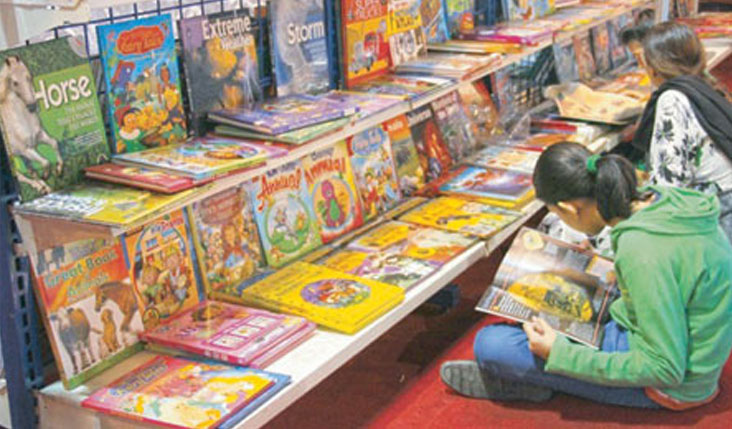 In my school days, every student in the class had a book with a red cover. This book taught us technicalities of the English language. On the cover, it said High School English Grammar and Composition but in classroom talk, it was called “Wren & Martin.” Due to its low price and considerably vast knowledge, the book is still being taught in schools all over Pakistan.

Until the 1990s, the book mentioned the name of its Indian publisher, S. Chand. Today, it carries the name of both the Indian publisher and its Pakistan distributors. No one seems to mind about the book’s origin as the content inside is well written.

For the past decade or so, book trade between Pakistan and India has grown manifold. Proof of this is easily visible at the annual Karachi International Book Fair (KIBF, ). The book fair is usually held in December and publishers from other countries, including India, directly or indirectly, participate in it. Direct participation occurs when a company representative from another country arrives to participate in the event while indirect participation takes place through local sales agencies.

Thanks to Penguin India, many South Asian classics are now available in English. India’s modern fiction, cookbooks, and books on ayurvedic remedies have always been hot favourites in Pakistan.

Last year, a local publishing house launched an Urdu translation of natural home remedies from India, the result of a deal negotiated at an international book fair outside Pakistan. The initial print-run of 2000 copies was sold out within weeks of the launch. This has happened with schoolbooks too.

This year, according to the organizing committee of KIBF, India had the largest foreign representation with 21 stalls. However, disappointingly, none of the Indian publishers were able to attend at the last minute, apparently due to the restrictive visa policy between India and Pakistan. In the very first hall stood the empty stalls of Vishv Books. The National Book Foundation of Pakistan handled the books that arrived for the stall of National Book Trust of India.

Two types of dealings usually take place at book fairs around the world: bookselling and printing deals. Through these deals, companies grant reprinting or translation rights to other companies around the world, and seek new, upcoming talent.

As most internationally acknowledged companies now operate in India, the cheaper editions of world-class material are now also available in the Pakistani bookshops. The biggest beneficiaries are libraries and students. During the five-day KIBF event, librarians from all over Pakistan come and stock up on the latest editions. This partnership between Indian publishers and Pakistan distributors helps beat piracy. An edition published in India competes easily with pirated ones. Furthermore, there is a growing demand for books by Indian authors.

“The language is lucid and the content is very student friendly,” said Shahid Iqbal who deals for Jaypee Medical Publishing through its local agent Paramount Books. “It is sad that the Indian delegates never got their visas.”

This year, it was sad to see the Indian books without their representatives. Without them, there was no talk of getting Pakistani materials printed in India and vice versa.

Hopefully, the upcoming visa relaxations will resolve the representation problem next year. But till then, it is pleasant to see that books-and not bombs-are being exchanged over the border.

One thought on “Exchange books, not bombs”