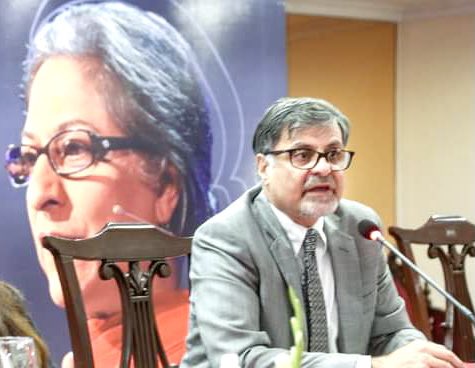 Kamran Arif addressing a gathering after the passing away of his mentor Asma Jahangir. File photo

As peace and human rights activists mourn the passing of lawyer and rights activist Kamran Arif, the Pakistan-India People’s Forum for Peace and Democracy India chapter has extended condolences and solidarity to “the peace-loving people of Pakistan” on his untimely demise.

Kamran Arif passed away in an Islamabad hospital April 2, 2021 due to complications arising COVID-19. He was 56.

Hailing from Charsadda area in Khyber Pakhtunkhwa, Kamran Arif had articulated time and again the need to ensure that former FATA was mainstreamed into KP fairly and effectively. The PIPFPD statement refers to him as “our KP leader”.

An internationally respected human rights defender, Kamran Arif was one of the earliest members of PIPFPD, associated with the organisation since its launch in 1993-94.

“He was significant in the formative years, especially with his mission of reaching the Forum’s work to his home region” notes the statement. Arif also served as vice-president of Khyber Pakhtunkhwa in PIPFPD Pakistan.

He also served as vice-chair of Human Rights Commission of Pakistan (HRCP), Khyber Pakhtunkhwa and was involved with South Asians for Human Rights, an organization co-founded by the iconic late lawyer and activist Asma Jahangir who was also one of his mentors.

Kamran Arif spoke up consistently for human rights, “particularly freedom of expression and of religion and belief” in the context of the criminal justice system that both India and Pakistan inherited from the British colonists.

“He was instrumental in the human rights movement in Khyber Pakhtunkhwa and in Pakistan and his loss is huge to the PIPFPD family,” says the statement, extending condolences to his family and friends.

Journalist Harsh Kapoor, who runs the South Asia Citizens Wire remembers Kamran Arif as “an unassuming young man with such a disarming smile” who touched a chord somewhere. “I can’t forget the trusting warmhearted manner in which he communicated.”