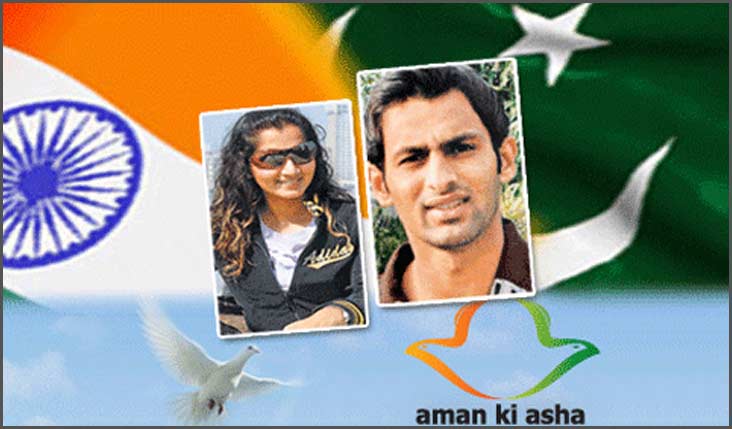 MUMBAI: It was as if the Gods had answered. Okay, so maybe not. But close on the heels of the hugely successful Aman Ki Asha Indo-Pak peace initiative by The Times of India and the Jang Group of Pakistan, cultural ties have been taken to a completely different level as India’s poster girl for tennis, Sania Mirza, and former Pakistan cricket captain Shoaib Malik announced they were set to get married.

But it all started in another country – Australia. Malik was there to play the third Test in their series against Australia. And Sania was playing in the Hobart Open. Sources have said that these two were staying in the same hotel, which is where the first sparks ignited, and they decided to keep in touch. The lovebirds then met again in Dubai in February. Sania was there to play the Dubai WTA Tennis Championships and Malik was part of the Pakistan team involved in a two-T20 match series against England. In a month’s time, it was confirmed that they’d be getting married in April. The Indo-Pak pair intends to settle down in Dubai after their wedding.

“My wedding is, Inshallah, going to be the biggest day of my life. I’ve been in constant media glare, I’d appreciate some privacy,” Sania said on a TV channel, with her dad, Imran Mirza, adding, “This is a unique case where husband and wife will represent their respective countries in sport.” “Thanks for all your support. And the news of me marrying Sania is true. Inshallah, we will get married in April,” tweeted Malik.

Mirza family sources confirmed that Malik’s mother flew down to Hyderabad three weeks ago and “convinced” Sania’s father and mother for the union. Shoaib’s mother told the Mirzas that she wouldn’t interfere in the life of the son and daughter-in-law, and that Sania could play tennis for as long as she wants. Another reason the parents agreed was that Shoaib and Sania will be living in Dubai post marriage, as Shoaib is a citizen of Dubai.

It may be recalled that Sania cancelled her engagement with childhood friend Mohammed Sohrab Mirza in January this year. Shoaib had gotten engaged to a Hyderabadi girl, Ayesha Siddiqui, in 2002, but snapped ties over the phone later. Her father, Ahmed Siddiqui, had even threatened to sue Malik in court and seek legal divorce. But Malik alleged that the family was trying to fleece him and stated in Karachi that no nikaah had taken place between him and Ayesha.