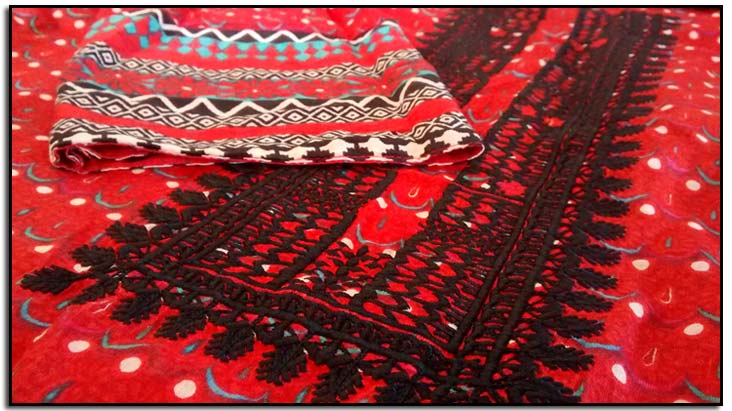 Embroidered Pakistani fabrics are becoming the rage in India

The Indian apparel retail industry, like any other, is a living organism. Constantly growing and evolving, it thrives on wedding seasons, celebrity fashions, festivals and fads. Its latest source of nutrition: the Pakistani fashion trend.

A decade ago only a miniscule percentage of India’s population donned Pakistani attires. The last few years, however, have witnessed an incredible absorption of Pakistani styles into everyday India. The long, flowing kurtas, beautiful laces and intricate embroidery that characterize Pakistani designs have captured the hearts of millions of Indians.

Back in 2012, the Pakistani Fashion Design Council (PFDC), in collaboration with prominent Indian businesswoman Mini Bindra, opened its flagship store PFDC – The Boulevard in Delhi. Since then it has been retailing top Pakistani labels like Libas, Hassan Sheheryar Yasin (HSY), Asifa Nabeel, Sonia Azhar, Fahad Hussayn, among others. The launch was followed by a fashion show, where 18 Pakistani designers displayed their work to give the Delhi crowd a taste of neighbouring fashions.

It was around this time that the fine Pakistani fabric known as ‘lawn’ entered the Indian market. Lawn cloth instantly became popular in India for the same reason it was a hit back home: silky finish, soft feel and perfect for the hot temperatures of our plains throughout most of the year. The icing on the cake was the original patterns, bright colours, floral prints and embroidered motifs.

“Good Pakistani designers use very unusual hues and combinations that are a novelty in India,” says teacher, mother, and long-time fan of Pakistani designs, Sarah Zaidi from Kolkata. She says the “suits” — as the shalwar-kameez-dupatta outfits are called — tailored in Pakistan are “stylish and stitched to perfection… a good break from the monotonous churidaars and salwars” that typify Indian fashion.

The difference between Pakistani and Indian suits, explains Lucknow based designer Huma Khan, lies in their embroidery and the way they are stitched. “In a Pakistani suit, the embroidery patches and laces are usually separate from the fabric and are assembled together while stitching.”

The introduction of Pakistani television shows to Indian audiences is one of the largest contributing factors to the recent explosion of Pakistani fashions in the Indian market. Zee channel’s Zindagi TV, broadcasting old and new Pakistani television serials, has had an avid fan following in India since its launch in June, 2014. The serials brought to the masses new characters to love, fresh stories to follow — and original fashion to relate to.

“Seeing the female characters in the shows wear such simple and elegant clothes, irrespective of age and roles, made me instantly fall in love with Pakistani kurtas,” says Priyanka Joshi, a 27 year old corporate immigration executive from Pune. “They look elegant and can be pulled off for work, parties or any occasion.”

hotel manager from Bhopal Anubha Rawat, 27, stumbled upon Pakistani outfits a year ago while shopping locally and online for weddings.

“The best thing about them is that they are so decent,” she explains. “Unlike Indian outfits, where cholis and blouses tend to be short, there is no exposure and you still look fabulous.”

With demand ballooning by the day, supply has competently kept par with it. Cross-border partnerships between designers, manufacturers, wholesalers, and retailers have secured a constant stream of Pakistani fashion in India. Today shops across the country offer all things Pakistani in terms of fashion, from casual kurtas to bridal wear for women and men. Pakistani retail has made its way everywhere: home businesses, small boutiques, as well as major showrooms.

The principal market, however, is most definitely online. Electronic retailing, or e-tailing, has been the perfect host for Pakistani fashion in India. While the big names in Indian online shopping such as Flipkart, Amazon, and Jabong have stocked their e-shelves with Pakistani pret, several Pakistani brands also offer international delivery through their online portals.

Websites and social media accounts solely dedicated to selling Pakistani designer fabrics have cropped up all over India. Most even offer stitching at a nominal fee.

For Aligarh based businesswoman Muntaha Qamar of PakistaniLawnShop.com, the affordability of the Pakistani designer wear is a plus point. “The good thing is that their range starts from Rs.700-800 and goes up to Rs.7000-8000, so all my customers can get what they want.”

Pakistani fashion has also managed to grab the attention of a diverse age group in India. Designer Huma Khan in Lucknow, who takes orders through her Facebook page ‘Pakistani Suits in Retail’, is proud to have a clientele ranging in age from 20 to 50 years.

The common thread of India and Pakistan’s historic cultural, artistic, and traditional similarities has facilitated the permeation of Pakistani fashion into Indian wardrobes. Indian professionals, housewives and fashionistas welcome and celebrate Pakistani trends and fabrics that offer exciting differences amid comforting familiarity.

All these factors have contributed to the Pakistani fashion retail industry finding a firm footing in India within a short span of time. There are still many trade barriers between the two countries but this gradual and constant exchange of traditions provides grounds for cautious optimism for improved ties between the two South Asian nations.

Born and brought up in India, Anam Husain is a food rescuer and aspiring baker who currently lives in Iowa City, the only UNESCO City of Literature in the United States.