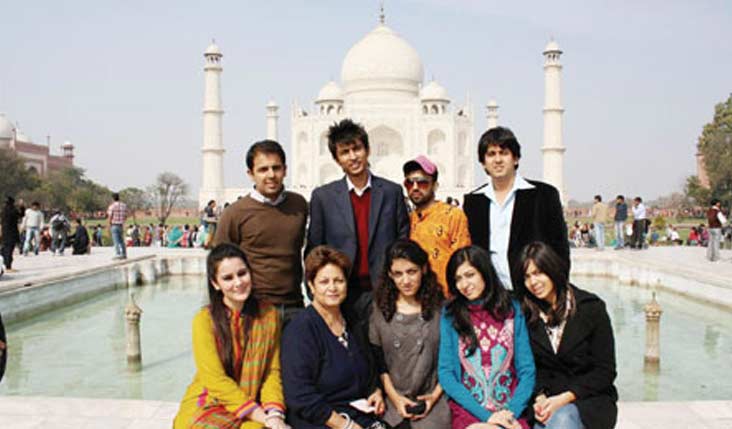 They buzzed with zeal and spoke with hope, passion and imagination. Around 15 students from some of Pakistan’s and India’s best schools and colleges met over a sandwich and juice to exchange knowledge about each other, beginning with a discussion on the Aman ki Asha initiative that brought them on a single platform at the Times House in New Delhi on Thursday.

The young scholars were unanimous that the idea of bringing the youth from the two countries together must be a precursor to more such meetings – the two-day sojourn was too little! After more than an hour of free flowing conversation, it was clear that minds uncluttered with the baggage of the past are our best bet for our collective future.

India and Pakistan, said the delegates in one voice, are inheritors of a common civilization legacy; they share the same idioms, the same diversities, and have more things that bind them in friendship than divide them in hostilities.Do the youth in Pakistan have any stereotypes about India? Happily enough only the palatable ones: food in thalis for Absaar Hussain from Greenwich University, Karachi.

For Shazre Bukhari, it was Bollywood. “Today there is simultaneous release of Bollywood films in India and Pakistan. Thanks to the TV channels that beam Indian serials, we know all about India,” said this student of business administration from Karachi.With such a lot going for peace between the two countries, what are the reasons for hostility?

One piped up, “It’s the monkey who gets the cake when two cats fight for it.” There are powers that do not want to see friendship between India and Pakistan, he said. “We must not fall for their manipulations.”Another one proffered, “Who will buy their weapons if there is peace?” To this Tahira Khan, who was managing the delegates, said, “Arms are made to hold each other, not harm each other.”With the talk drifting

towards hurdles that keep the people of the two countries separate, young Arham Siddiqui of Ryan International in Greater Noida enlivened and animated the kindred spirits with a strapping rendition of a ‘sher’: Kaun kehta hai aasman mein chhed nahi ho sakta? Ik pathhar to tabiyat se uthao yaaro! (Who says the sky cannot be pierced if a stone is thrown at it with our joint might?)”It drew applause from everybody present including TOI’s chief marketing officer Rahul Kansal and some senior editors.Salar Khosa played the guitar and the group from Pakistan sang, “Mohabbaton ke safeer hain hum, chaahaton ke amir hain hum.”

While each student wrote down ideas they thought could bring India and Pakistan closer, Deepak Talwar, the Rotarian from Delhi who conceived the student meet, suggested blood donation camps by visiting delegations to seal the hope of peace and friendship. Ameen.

*  Easier visa regime for all
*  Accurate portrayal of each other in the media
*  Visa on arrival for students
*  Student exchange programmes
*  More admission facilities for Pakistan students in Indian institutions
*  Revival of cricketing ties
*  Exchange of musicians, artists and other cultural ambassadors
* Creation of a permanent platform where students from both countries can interact

An enriching experience, amazing hospitality Diary of a cross-border traveller