Two recent Track-2 initiatives between Indians and Pakistanis underscored the need to ease travel, trade and visa restrictions between the two countries and let people meet 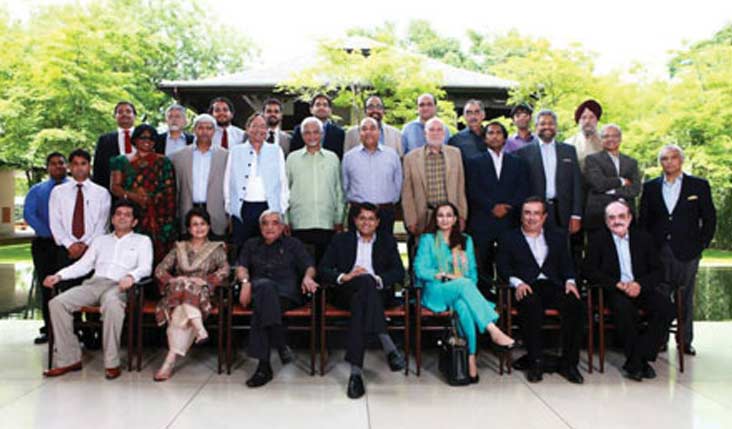 At a recent meeting held in Thailand, Indians and Pakistanis discussed the significance of a new government in New Delhi and the opportunities it creates for Indo-Pak relations, particularly in trade and economic integration, as well as peace and security in Afghanistan, reports Mariana Baabar in The News.

At end of the two-day

14th Chaophaya Dialogue in Chang Mai organised by The Jinnah Institute and the Australia India Institute, Melbourne, delegates urged both governments to take “steps for additional confidence-building measures (CBMs) to lessen the trust deficit, particularly the establishment of a hotline linking the two PMs” and “meetings between the two army chiefs as well as the heads of intelligence agencies and more frequent interaction between DGMOs”.

There is a need to revisit the 2003 ceasefire agreement on the LOC and create “norms of necessary crisis management structure jointly which will detail rules of do and don’ts and standard operating procedure”, says the statement.

The statement urges furthering trade between India and Pakistan and hopes that the Commerce Ministers at the SAFTA Ministerial Council in Thimpu in July 2014 will “arrive at an early conclusion of discussions on the subject”.

“India and Pakistan should commit themselves to non-interference in the internal affairs of Afghanistan,” says the statement, which urges Afghanistan to “not allow the use of its soil for actions prejudicial to peace and security in the region”.

The recommendations urge the two governments to liberalise the visa regime for students, academics and journalists, in particular for correspondents to be stationed in each other’s capitals”.

At a bilateral dialogue last month in Islamabad, delegates expressed a strong desire for India and Pakistan to “free themselves from the bitter legacy of tension and acrimony” and stressed the need for “peace with justice and equity” for both sides.

Organised by the Regional Peace Institute and supported by the Hans Seidel Foundation, the high-powered meeting held on June 14, brought together prominent politicians, diplomats and journalists from both countries.

According to a recent press release, participants appreciated the positive tone and content of the meeting between Prime Ministers Nawaz Sharif and Narendra Modi and hoped that the proposed meeting of the foreign secretaries will lead to a resumption of the bilateral dialogue, suspended for over five years now. “This could bring about an extremely meaningful change in the atmosphere in our two countries as well as the entire region”.

The participants agreed that the governments should discuss all issues, including contentious ones like Kashmir and terrorist violence. They strongly condemned all acts of terrorist and other forms of violence irrespective of the perpetrators or victims.

Both governments should “take all necessary steps to combat forces of religious extremism and to promote our common heritage of religious freedom, tolerance, plurality, peace and brotherhood,” says the statement.

Enhanced connectivity in the economic and social sectors can greatly contribute to furthering the prospects of peace, they said, highlighting the key role that the media needs to play in this respect.

Participants stressed the need to allow the people of both countries to meet. They urged the easing and simplification of visa procedures, suggesting automatic visas for many categories, “to enable a wide range of professionals as well as tourists to travel from one country to the other”.

Pakistan and India need to fight two fights: the one within and the one without. “The fight within relates to addressing the fear factor and the fight without is to engage with each other in an irreversible and interrupted dialogue that encompasses all areas of contention.”

The statement urges India to open a consulate in Karachi and Pakistan to do so in Mumbai. The Indian government, in keeping with its promise in the late seventies, should hand over Jinnah House in Mumbai to Pakistan to open its consular office, adds the statement, ignoring the legal wrangling over the property.

The two governments must engage with each other and to transcend the bitter legacy of the past and focus on “the underprivileged and impoverished people of the region”, says the statement.

Such reconciliation will benefit the entire South-Asian region immensely, ushering in “an unprecedented era of multidimensional progress and prosperity.”