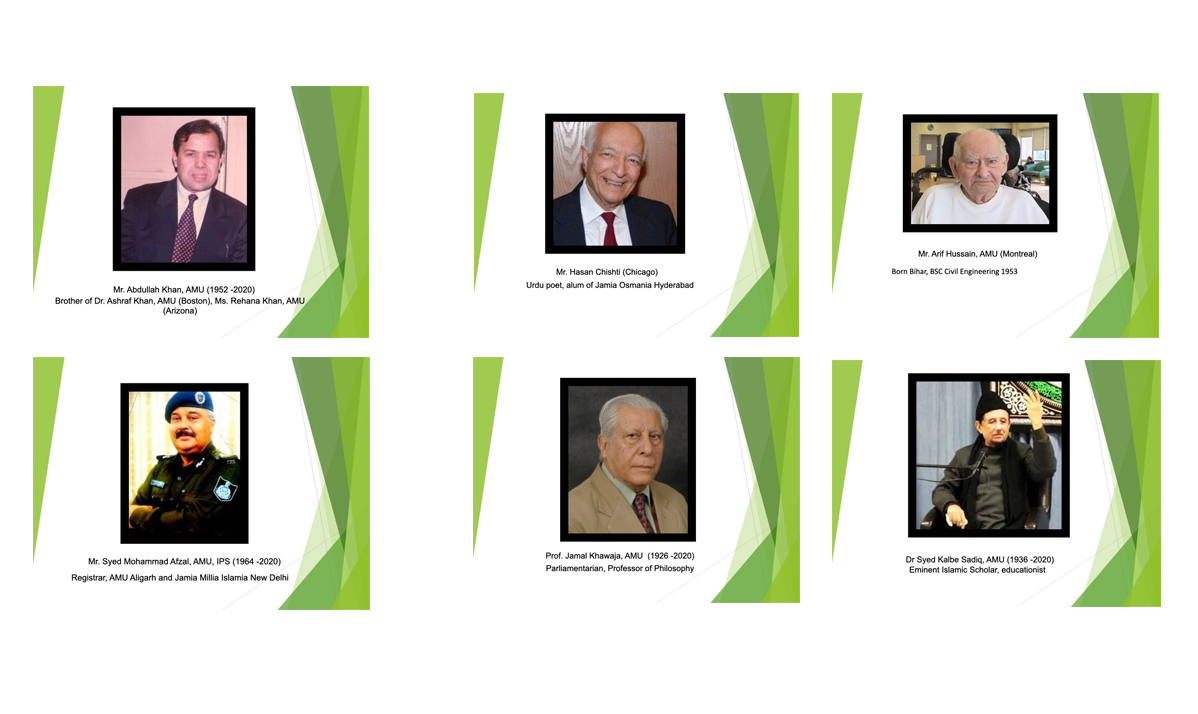 The year 2020 will be remembered for the toll taken by the COVID-19 pandemic. Like millions around the globe, expatriate Indian and Pakistani communities in the USA and Canada were also hit by the bereavement of many close friends and relatives, especially towards the end of the year, some due to the coronavirus and due to other ailments.

The Aligarh Alumni Association of Washington, DC, organised an online condolence meeting last week in lieu of its regular Saturday morning lecture series to commemorate some of the departed souls.

Sharing the bond of loss, dozens of participants across North America as well as in other countries, including “back home” in India and Pakistan attended the meeting. Relatives and friends of the deceased persons spoke about their lives, achievements, and contributions in different fields.

Perhaps the most prominent of those remembered at the meeting was the internationally acclaimed Urdu language poet, author, critic, and theorist Shamsur Rahman Faruqi, 85, who died in Allahabad, India after a brief illness brought on by COVID.

The youngest of those honoured and remembered was Sajid Ansari, 36, who died in his sleep. The younger son of Drs. Hashima Hasan of NASA, and Aftab Ansari of National Institute of Health in the Washington, DC Metro area, he also leaves behind his minor son and daughter who he was devoted to, and older brother Sadiq.

The meeting also paid tribute to prominent Shia scholar, educationist, and reformer Maulana Kalb-e-Sadiq, who died after a prolonged illness in Lucknow, India. Equally respected amongst Sunnis and Shias of India and Pakistan, he was an advocate not only of Sunni-Shia unity but also of Hindu-Muslim harmony in India. His loss is felt all the more keenly given the rampant sectarianism and religious polarisation in the region.

Internationally recognized poet, and writer, Rashida Ayan from Pakistan who had settled in the New York area and died recently in New Jersey was also remembered, as was Hasan Chishti, a literary icon for several decades. At 90, he breathed his last in Chicago after a long ailment.

Others who were remembered included S. M. Afzal, a prominent member of the Indian Police Service and Registrar AMU and Jamia Millia, who passed away in Delhi.

Asma Beg who passed away in Pakistan, wife of General Mirza Aslam Beg, former Pakistan Chief of Army Staff, and elder sister of Aisha Khan of AAA-DC, was remembered for her down-to-earth nature and humble manner.

Another recent loss is that of Natasha, 41, the younger daughter of retired Pakistani bureaucrat Rashid Latif Ansari, who headed EMI and Shalimar Recording. Based in Toronto for some time, he has done voluntary translations from Hindi to Urdu for Aman Ki Asha.

She was diagnosed with colon cancer in Lahore in July where doctors said there was nothing they could do to halt the aggressive growth. When she landed back in Toronto, medical opinion there was the same.

Two Indian origin friends devotedly looked after her. Ranjeet Kaur in Toronto defied Canadian quarantine rules to be constantly with her. Leaving behind her two small children, Ritu Upadhya in Dubai flew to be with Natasha in Mexico when she went to try alternate therapy there and nursed Natasha round the clock. On 7 November, Ranjeet flew from Toronto to relieve her.

Both women travelled to Mexico at their own expense and looked after Natasha constantly till 29 November when she breathed her last.

Based in Washington D.C., the writer is a longtime journalist who has authored three books, the latest a novel titled Anahita ki Janam Basti about a woman journalist She heads a journalism organization The Global Beat Foundation. Email: [email protected]. Additional reporting by Beena Sarwar, editor Aman Ki Asha.