Aman Shanti: If not now, when? If not us, who? Children speak 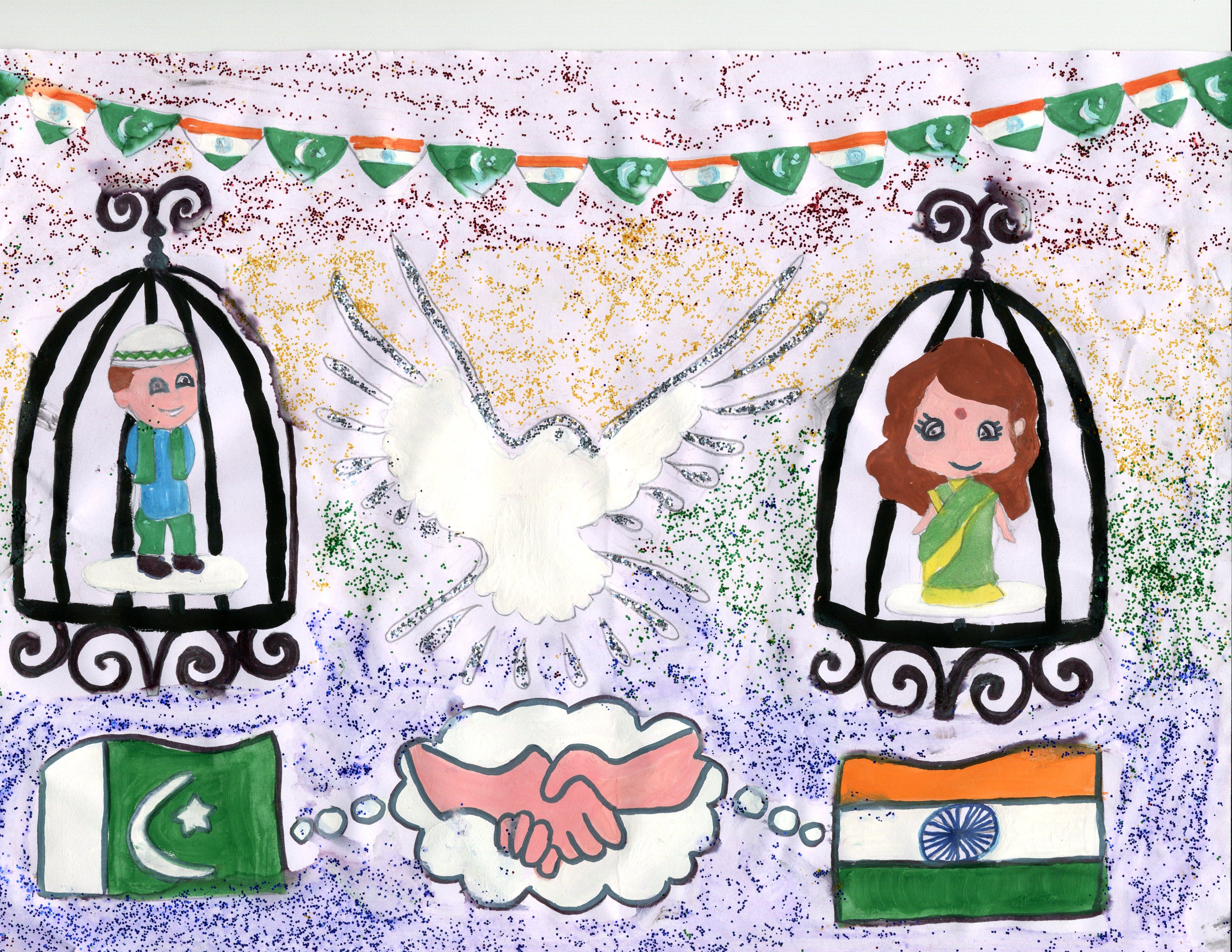 “The meaning of my name ‘Aman’ is peace”, wrote Aman Shahid, a sixth-grade student in Lahore. “I am sure that there must be some Shanti across the border thinking the same way”. She was right. When two Indian teens in Mumbai read her plea for peace, this is how they responded

Seeking a kilo of peace

My name is Avnee which means ‘the earth’ in Hindi. I don’t know what ‘earth’ means in Urdu or Sindhi or Punjabi which I believe are languages dominantly spoken in Pakistan. Sometimes I wonder if names also create a barrier in our perception of the other. Were names made to distinguish our identity or mankind?

Yet even I think if our earth designs a nature of only war and conflict then what is so good about my name? I for sure wouldn’t want to endanger my species due the war and conflict that is affecting not only nature but also all humankind.

Aman Shahid and her painting for peace

We learn peace building and compassion in school because it is our responsibility to wear it and not disregard it as a forceful illusion. We aren’t emancipated enough to voice our rights as young people. But the time has come that we should.

Sometimes the idea of peace, in face of monstrosity that war brings, impossible. I don’t see what choice we have other than persisting and hoping that small gestures of love and friendship will make a difference.

I can sympathies with your thoughts considering the lack of cultivation of peace that is nowadays is pronounced amongst us. Or was it ever? I too feel the lack of emphasis on terms such as these.

I don’t understand exactly why there are news channels, are they just supposed to be another source of nonfiction entertainment? Are we not obliged to do something?

Children haven’t and won’t be responsible for this violence yet we are raising our voices. And so should those who are in fact responsible. We need to understand that love doesn’t last long without peace, hope and justice. Just like a plant that doesn’t survive without the air, sun and water.

I too feel your much-needed rhythm of peace. I want to be a piece in the puzzle of peace — Shanti or Aman. With this thought, let me share a poem with you that I wrote. I know this poem won’t make a difference or end the evil thoughts of mankind but I do hope for it to break the border of silence that is spread like a disease amongst us all.

A poem by me

In the sitting rooms of Bombay and Delhi it is all fine.
Skirmishes, deaths and slight conflict continue on the line.
This is not a problem regarding petty criminal or economic hoarders.
Here we have emotions roaring and issues regarding the border.
As time goes by, calendars are bound to turn.
We sit and wonder when will Kashmir not ‘burn’.
Services around the world are available for a certain fees.
Oh god please be kind enough to tell me where can I buy a ‘kilo’ of peace.

We children can make a difference

Jai Agrawal: “We children can make a difference”

“The meaning of my name “Jai” is victory in Hindi. I would like India and Pakistan to emerge victorious together rather than fight against each other. This spirit will help us grow as human beings.

I am a 14-year old Indian born in London. I really love drones, it is just something that I cannot resist playing with. The first time I saw a drone I wondered how it flies. I slowly learnt the mechanics and eventually learnt how to fly it. I also learnt how to make a drone from my friend Dipesh who has been designing drones since he was a kid.

My parents, grandmother, my sister and I live in an apartment together in Mumbai. In India, we celebrate many festivals like Holi, Diwali, Christmas, Eid etc. In Pakistan, similar festivals are celebrated. Unfortunately, we see divisions in these celebrations rather than friendships and opportunities to bond with each other. These discords give rise to violence and conflict.

I like watching Pakistani actors and actresses on screen. Some of my favourites are Mahira Khan, Fawad Khan, and Ali Zafar. I loved their performances in Bollywood movies such as “Khoobsurat” and “Tere bin Laden.”

Art has the potential to unit people, heal wounds and bring scorched souls together. It is with this hope that film directors and artists collaborate. Films and TV shows allow viewers to imagine and visualise a space where Indians and Pakistanis can be friends beyond borders. However, with recent censorships and restrictions on the artists, these spaces are shrinking, adding fuel to the fire. We as children need to defend these pure acts of peace and shield against the barrage of violence that we view on television.

India and Pakistan have been at war since a long time and I think that this war is causing a lot of damage to innocent people and our armed forces. Peace is the only solution to war. If we as individuals come together, we can make a difference. It is children like us that can make a difference.

My mother’s cousin Ali Zafar is a Pakistani actor who came to Mumbai and made it big in Bollywood. My maternal grandfather, grandmother and all their ancestors were born in what became Pakistan. My maternal great grandmother was the first female dentist in Pakistan and her clinic still exists in Karachi.

Aman, I think we need to find stories that unite us and share them with others. These stories lie like hidden treasures and people should be made aware of this.

One day I would like to visit Karachi and see how my maternal great grandmother’s clinic is doing after all these years. I would love to meet Mahira Khan and my uncle Ali Zafar too. It would be interesting to know how similar Pakistanis are to us Indians. And I know I won’t be proven wrong.

Pakistan and India have been in a war for a long time and honestly, we need to stop fighting for small things. We should take note of the positives and forget about the negatives. We share festivals, languages, sports.

Both India and Pakistan are rivals in cricket. We have stopped playing cricket in our own countries against each other but played each other recently at the Champions Trophy 2017 in England. Ironic, isn’t it?

It was enriching and historic to watch the two rivals face each other in this series, in Birmingham and London. I felt that the two teams played very well and the matches seemed even bigger than the World Cup final. I see this as a positive sign. Watching each other share the same field gives me hope for a better future.

Facing each other on the big stage shows us that we can unite by playing cricket together and there is no need for this rivalry. India and Pakistan are united while playing sports.

We the children are the future and we can make a difference by uniting and break false ideas and perceptions about each other. We as neighbours must reach out and protect each other. We can be the change that we wish to see. Don’t you think?