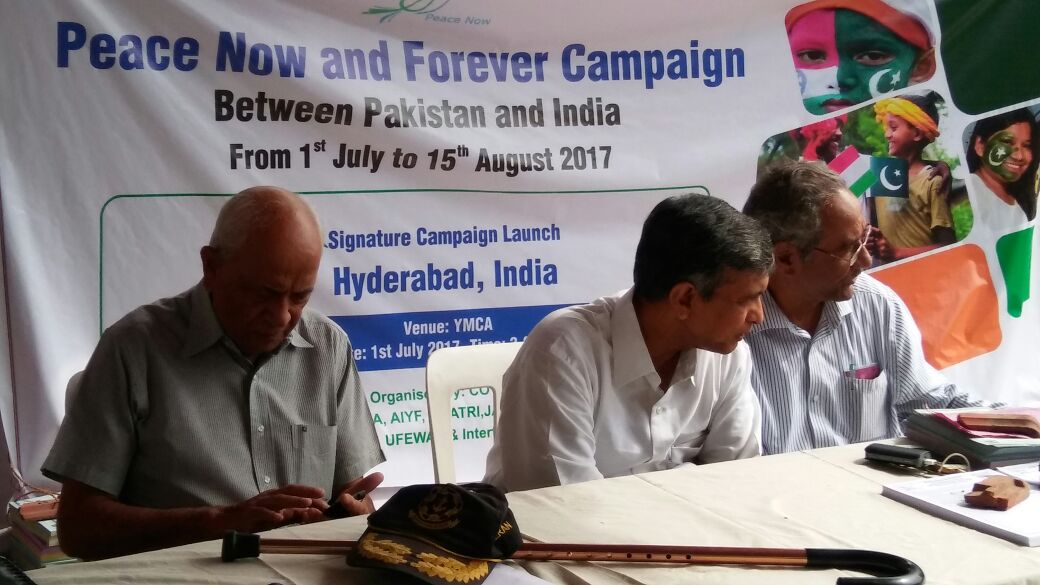 A citizens’ campaign calling for Peace Now and Forever between India and Pakistan launches simultaneously in both countries on July 1. The biggest launch is expected to be in in Bangaluru, with 100 musicians from 10 bands playing “Amam ke hum rakhwale sub ek hain” (we keepers of the peace are all one).

The campaign takes forward an earlier seven-point peace resolution endorsed by nearly 1000 Magsayay Awardees, prominent artists, writers, journalists, politicians, retired military officers, students and others from Pakistan, India and elsewhere. The joint statement calls for uninterrupted and uninterruptable dialogue between the two countries, implementation of the 2003 ceasefire in the disputed region of Kashmir, and restoration of trade, cultural and sports links, among other things.

The aim of the 45-day campaign, say the organisers, is to address the declining relations between Pakistan and India and “to provide platforms to enable common people and civil society to demand peace and condemn war mongering without feeling apologetic or guilty about their stand”.

Networks and organisations in 22 of India’s 29 states and in Pakistan’s four provinces are partnering in this initiative to be launched simultaneously from several cities in India and Pakistan on 1 July, 3 pm India time and 2.30 pm Pakistan time.

“We expect the Peace Now Campaign to be undertaken in around 200 cities, towns and villages in Pakistan, India and other countries”, says campaign convenor Mazhar Hussain.  The campaign will culminate with a joint celebration on 14-15 August 2017.

Apart from the joint signature campaign supporting the earlier resolution, organisers have planned several simultaneous programmes in different cities and towns during the coming weeks.

They plan to especially focus on the seven weekends coming up, with events like lectures on peace in schools, colleges and universities including the need for cordial Pakistan India relations, art, film and documentary festivals, cultural camps, interfaith prayer meets, peace caravans, rallies and marathons, besides outreach to political parties and elected representatives.

In Pakistan the launch will take place in several cities including Benazirabad, Hyderabad, Islamabad, Karachi, Lahore, Larkana, Mirpurkhas, Quetta and other towns.

Organisers expect more cities and towns in Pakistan, India and other countries to join the Campaign in the coming days.

The Campaign will conclude with a Festival of the Sub Continent for Union of Hearts across different cities and towns on 14-15 August 2017, along the lines of the first such Festival on 14-15 August 1997 to commemorate 50 years of independence from colonial rule. There was enthusiastic participation from organisations around India, Pakistan and other countries across the world where Indians and Pakistanis live.

That was the first time Pakistanis and Indians came together to celebrate independence on both days- 14th and 15th of August and not on just one day ie. 14th or 15th. The response to this call was phenomenal, recalls Mazher Hussain, remembering the scores of organisations in India and Pakistan and other countries that organised events around this theme.

The organisers hope that a continuation of such programmes with original ideas and far reaching impact in developing positive public perception.

Aman Shanti: If not now, when? If not us, who? Children speak Hindu-Muslim unity: Remembering the Battle of Chinhat