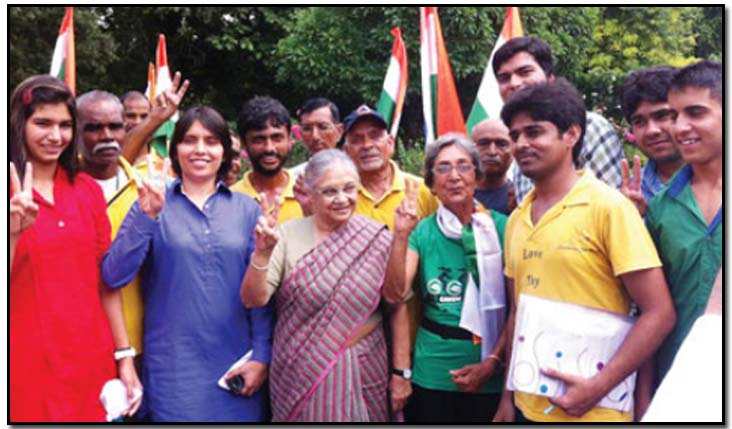 At a time when governments in India and Pakistan are investing crores in strengthening their armies, a group of students from Delhi University is cycling thousands of kilometres to stress on the need for peace between the neighbouring countries, writes Varun Bidhuri in Millenium Post, India, Aug 1, 2013. The students began their journey from Kanyakumari in the southern state of Tamil Nadu on June 1, gathering thousands of signatures in support of their peace campaign.

Aman ki Asha reported on this unique tour titled We Love Our Neighbour Pakistan on July 17, 2013, after the Delhi University students had reached Vadodra.

There, six senior citizens joined them, including Bhagwati Oza, a 77-year-old gynaecologist, and 75-year-old Bakim Bhai Patel. The senior citizens are cycling with them to Wagah border to celebrate the combined Independence days on August 14 and 15.

Cycling over 70 kilometres a day, the group reached Delhi on July 31, having covered over 3,200 kms, through Tamil Nadu, Karnataka, Maharashtra, Gujarat, Rajasthan and Haryana.

The group hopes to cross over Wagah border into Lahore, reaching Islamabad on Aug 31,”to meet people and tell them about our message,” says campaign convener Pravin Singh Kumar.

“We want to tell people that peace is good for both the countries.” They are currently waiting for their Pakistani visas.