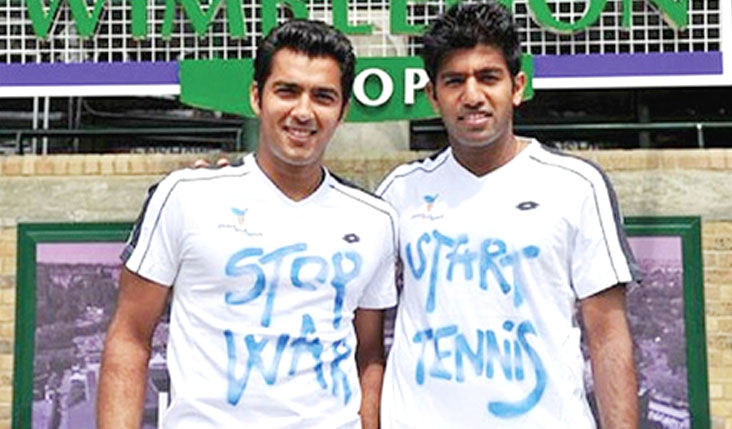 There is growing support for their symbolic event – the Stop War Start Tennis campaign. Both players want a match organised between the two countries, but with a twist. They want the match to be held with a net strung across Wagah border. Now that would be a great feat.

The duo are hopeful that their doubles partnership will improve bitter relations between their countries, particularly since the initiative is now backed by the world tennis body and an international peace group.

The International Tennis Federation (ITF) has thrown its support behind the scheme, along with Peace and Sport, a non-governmental organisation run by Prince Albert of Monaco.

“A lot of good things have been achieved, the ITF is now supporting this, Peace and Sport is also supporting this,” Qureshi, who is also Aman ki Asha Ambassador, has said. “The letters have gone to both the prime minister and president of both countries.

“It is a political issue and there are a lot of security concerns, so we are just hoping that the governments will give us the green light so we can play that match on the border.”

Both players, who were finalists at last year’s US Open and gave their opponents, the top-seeded Bryan brothers tough competition, are confident of a positive response from their respective governments.

“Things are going in the right direction,” Qureshi said.

“Last year, at the US Open, both the UN Ambassadors for Pakistan and India came and watched our matches, which was a huge thing and they are supporting the cause as well.

“Things are going in the right direction; we just have to keep playing our matches and get more and more publicity on the bigger occasions. Hopefully it will happen this year.”

A spiritual awakening Signs for those who will see