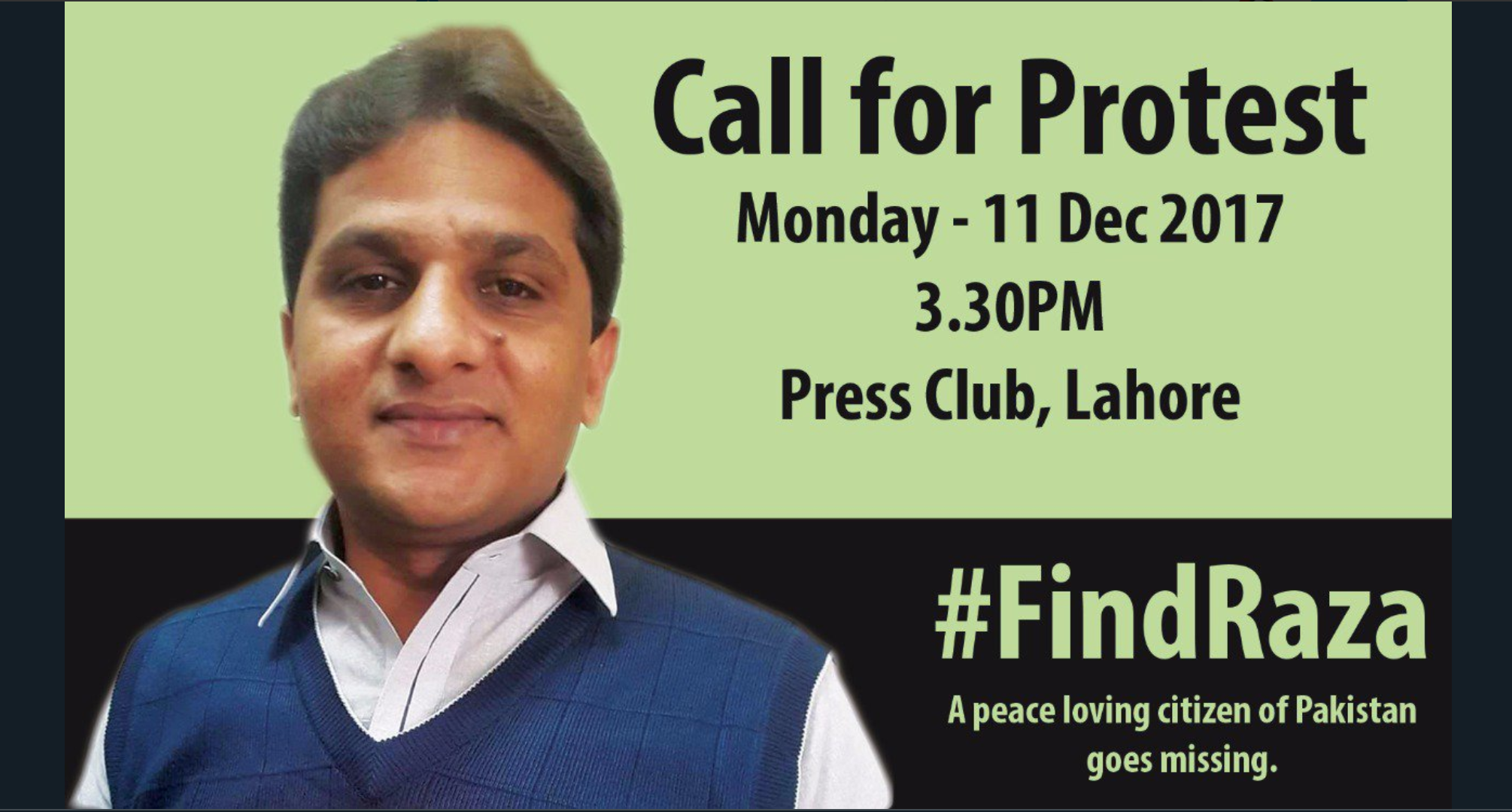 Friends of Raza Khan and civil society activists are gathering at Lahore Press Club 11 December, 3.30pm, to protest against his abduction and enforced disappearance #FindRaza #RecoverRaza

I cannot find the words to express my grief over the disappearance of my dear friend Raza from Lahore. When I heard that he was missing, it shook me to the fibre of my being. How can a man who never raises his voice, hardly argues, politely shares disagreements, and has not hurt any living being pose any threat? What will anyone gain from his disappearance?

I cannot imagine what he is going through now. Is he cold? Has he eaten? Has he slept? Is he hurt or in any kind of physical pain? I don’t know where he is, but it is important that we all know who Raza is and move heaven and earth to bring him back. If I could only walk across the Wagah border to look for him on foot, I would. If we abandon him at this hour, there is no coming back from that place of darkness.

Raza Khan is the Pakistan Convener of Aaghaz-e-Dosti (Start of Friendship), a cross-border youth group of Indian and Pakistani peace lovers. He is the Coordinator of Hum Sub Aik Hain, a registered organisation in Pakistan that provides a platform to people across classes and religion to share their dreams and hopes for a peaceful Pakistan.

He comes from a humble background and decided to pursue his education in gender studies in his thirties. Not only is he self-funding his education, but has made social activism, peacebuilding through education and interfaith faith harmony his life’s work. I am grateful to have been connected with this gem of a person, Raza Khan.

It started like this. In 2013, I was teaching at an international school in Mumbai and wanted to send Independence Day cards to students in Lahore. I reached out to through Aaghaz-e-Dosti to connect me with educators and schools there.

Devika Mittal, AeD convener in Delhi sent me contact details of a man named Raza Khan but without an area code for his address. The school courier person was arriving any minute and I was running out of time. I made an international call to Lahore and reached Raza’s phone. He was in a crowded place. Later he told me he had stepped out of his class to attend my phone call.

I thanked him profusely for working with me on the greeting card exchange project. His reply: “We are not doing a favour to each other, both of us are working for this project because we are passionate about building peace between our two countries.”

That was the beginning of a new friendship, not a cross-border alliance to fill our Facebook walls. Our cross-border letter exchange and Skype calls blessed me with a friend for life even though we have never met in person. I feel sad about that but I know one day we will meet — if not beyond the meshed wires that say we are supposed to be enemies and not friends, then in another land where there are no such barriers.

In March 2016, Lahore bled in the aftermath of the Gulshan-e-Iqbal blast, killing mostly hundreds of innocent children and mothers. I contacted Raza to ask if my students could send solidarity cards to children in Lahore. He found a school with a vast majority of the Christian community attacked in this blast. He also ensured that these cards reached students who had lost their siblings and friends in a horrific manner.

Raza lauded my efforts and appreciated me for inspiring him, even though he was the one who did the groundwork. He had to seek contacts, build networks, deliver the letters and organize their distribution.

He would go with his jhola, wear a simple kurta and pajama and post images of students receiving and sharing greeting cards. He was like Santa Claus – not the one that brought presents, but a bagful of love, hopes and dreams. It brings him immense joy to move hearts, to provide education to children where they learn to question and challenge the systems that advocate hate and animosity. He strongly believes that all children have a right to education that allows them the freedom to meet new people, bridge barriers and break stereotypes.

As a fulltime teacher, I was often busy. The rigmarole of exams, tests, assessments and unit planning did not allow for many opportunities to make India Pakistan networking the soul of my teaching as I would have liked to do. Raza steered our future activities, travelled across cities, met all my requests, initiated Skype talks, people to people contact, and sometimes pushed me to finalise dates.

I have interacted with armchair activists who use oratory and elitist writing to promote peace. While I do not discount their value, the focus of their work is often not the people they are working with and for, but their polished and politically motivated social media image.

Raza is different. He comes from a humble Urdu/Punjabi speaking background and rather than his own accomplishments, he brings to fore the voice and faces of Pakistani children. He facilitates dialogue from behind the scenes and captures stories of friendship, without highlighting his role in the process.

As Raza and I connected over these projects, we started having discussions about interfaith harmony. If we couldn’t find a way to restore harmony in our own countries, how can we strengthen the ties between India and Pakistan, he asked. We discussed possibilities of creating a peace education programme, but Raza is a visionary.

He saw the opportunity to construct a platform to have intersecting conversations on interfaith relationships, violence, patriarchy, environmental issues and the role of arts in peacemaking. His idea transformed into a vibrant space – Low-key Lokai (People and Community) to realise his mission of ‘Hum Sub Ek Hain’ (We Are All One).

Since I moved to Japan in August, we have not had the opportunity to work with each other. However, Raza has kept the children’s letters alive, exhibited them at influential places in Pakistan, cared for them and preserved them. These letters are and will forever be symbolic of our friendship.

He frequently asked about my wellbeing, my food and adjustment in a new country. On my birthday, when I was eating alone at a restaurant in Japan, I heard to his beautiful voice message. I had shared with him the loneliness and anxiety of adjusting to a new environment, and he had offered words of comfort.

I knew I was never alone and that far away in Lahore, this friend would always attend my phone calls even in the middle of the night. If ever he was unable to take a call, he would be profusely apologetic. Our conversations begin with his warm Lahori tehzeeb: “Good evening, Kaise hain aap?” He wishes me on Diwali, inquires after my parents, conveys his greetings to my family, and always listens with empathy and compassion.

If something ever happened to me, this man will stand with a placard in his hand on the streets of Lahore. Even for those with differing viewpoints. Raza believes in the power of humanity. He loves and cares deeply for people beyond caste, sect, creed, gender, faith and religion.

We, the people of South Asia, whether from Pakistan or India or anywhere else, all those who believe in humanity must fight for Raza’s return. We must bring him back safely.

Tulika Bathija Tulika Bathija is a peace educator and currently teaches English at the Nagoya International School in Japan. Email: [email protected]. This piece is adapted from her comment published in Youth Ki Awaaz

Mea culpa: I too have eaten dinner with Pakistanis Bartering peace in Kashmir