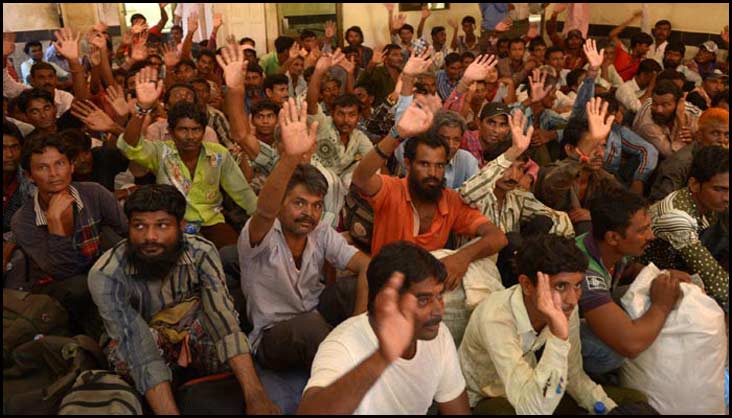 While appreciating Pakistan’s release of over 400 Indian fishermen at the end of December 2016, rights groups have expressed their concern about the Pakistan’s Maritime Security Agency’s arrest of more than a hundred fishermen from India on March 25, 2017, MSA has also seized 19 fishing boats.

Pakistani fishermen also face this threat from India, but the current number of arrests is extremely high and “has not happened in the recent past”, notes the Pakistan-India Peoples’ Forum for Peace and Democracy (PIPFPD).

The Indian Coast Guard and Pakistan’s MSA must dialogue on this issue specifically, says PIPFPD, noting that such arrests are a violation of human rights and the United Nations Convention on Law of the Sea.

Both governments must discuss this issue in detail at the forthcoming meeting of these two agencies scheduled next month. The long-standing demand of people of both countries for a No Arrest policy, that has not even been considered for discussion yet, must also be placed on the agenda.

These arrests are severely affecting the economy in India’s Saurashtra region where the fishermen are from. They “create an atmosphere of fear within the community and hesitation to go to the sea”, says PIPFPD, which “ultimately affects the fishing industry as a whole”.

Such arrests affect not only the detained fishermen but also their entire family and community, with young children particularly being deeply affected. Their upbringing suffers as they lose the support that they require to carry on their education.

Rights groups and peace forums also urge both governments to implement the various mechanisms set up like the India Pakistan Judicial Committee on Prisoners that “must be revived since it gives the arrested people an opportunity to put forward their case status, their grievances, health related issues etc” says PIPFPD.

The suspension of dialogue between India and Pakistan particularly adversely affects members of the fishing community whose lives and livelihoods are at stake. Both countries must commit to dialogue and ensure that the “people are not made victims of the politically created hostilities between the two countries”, urges PIPFPD.

Cross-border friendships and solidarity From ‘dushman’ to ‘dost’: schoolkids bond at a cross-border video conference