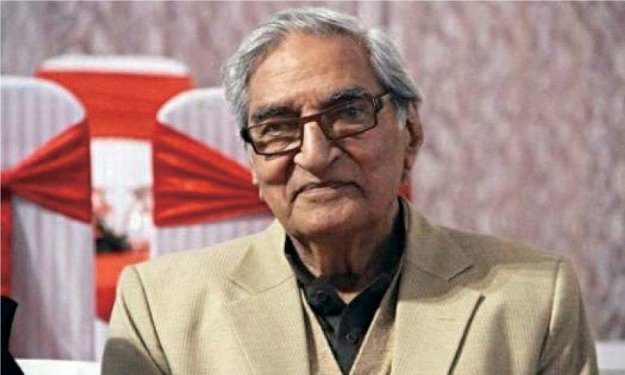 When I heard from a friend in Jalandhar, India, that Munnu Bhai had passed away in Lahore, Pakistan the day before, I felt all kinds of emotions and feelings.

A popular columnist, writer and poet, Muneer Ahmed Qureshi, universally known as Munnu Bhai, was another Punjabi Piyara (dear Punjabi), as we called all those who supported the Academy of Punjab in North America (APNA).

A whole bunch of us had come together to form more than 20 years ago for this labour of love aiming to bring Punjabi-speaking progressives together. This effort grew with leaps and bounds. We held conferences in USA, Canada, UK, Australia, East Punjab, West Punjab, Japan, and several countries of Europe, wherever Punjabis live. Our website has become the most extensive resource for Punjabi culture, thanks to Safir Rameh our webmaster.

Munnu Bhai always espoused progressive ideas. Some of his TV plays became very popular. His television serial Sona Chandi, was one of the most popular serials in Pakistan, and also across the border in India. It showed the world from a viewpoint of a young couple that comes to city from countryside and work as domestic help.

The government of Pakistan recognised his literary achievements with its highest award, the Pride of Performance in 2007.

I called some friends to convey my condolences to his family. He was 84 and lived a life of courage. I have fond memories of spending many days together several years ago, when he had come for our Punjabi conference in Washington DC. He had a great sense of humour but was also a deep thinker.

At the conference, I had read a paper on Punjabi Philosophy in which I traced the evolution of Punjabi thought from antiquity to the present. Munnu Bhai, was very happy that I was working on this topic and asked me to publish a book on Punjabi Philosophy as there was not a single book on the subject.

He said, “If there can be Greek philosophy, why not Punjabi philosophy”. He asked me to email my paper to him as he wanted to think about it and discuss it further.

“We have a lot of work on Punjabi language and literature, but no one has thought or written about Punjabi philosophy, it is about time this field was developed”, he said.

The conference was followed by a mushaira (poetry session), in which Munnu Bhai recited a very moving Punjabi poem about the poor state in which Punjabi language finds itself. The ruling elite of Punjab considers Punjabi to be an inferior language, a language of rustics and domestic servants and prefer to use Urdu and English. Punjabi is not taught in schools in West Punjab.

I told him that even in East Punjab, the language is in bad shape, despite being the state’s official language. In villages, teachers beat children in English schools if they talk in Punjabi. He quoted a couplet by Maula Baksh Kushta, “Maan boli jey bhul jayoge, kakhan vangu rull jayoge” (if you lose your mother tongue, you will be devastated).

He wished that some sanity would prevail over the rulers of India and Pakistan, so that Punjabis on both sides of the border could get together and meet.

Mutual friends would keep me updated about Munnu Bhai and I would occasionally read his writings online. Along with other Punjabi Piyaras, Munnu Bhai was a great inspiration to young Punjabi writers in both East and West Punjab.

It is due to the work of people like Munnu Bhai that Punjabi is flourishing in West Punjab, in spite of indifference and hostility of the official circles.

Munnu Bhai, your life and work will be remembered by coming generations.