The man from Jhang 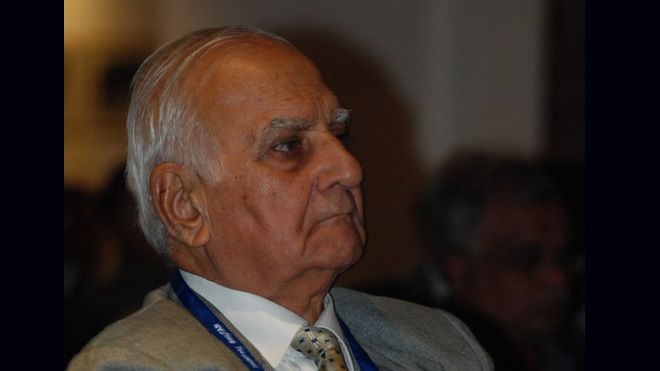 Distinguished political reporter and peacemaker. Photo by the author

Jhangi, KK or Katyal sahib who loved everything and everybody associated with his hometown and worked for peace between the two countries
By Waqar Mustafa

I don’t remember the day I first met K. K. Katyal. But I can say, for sure, that after being introduced to veteran Indian journalist by Imtiaz Alam, the Secretary-General South Asian Free Media Association (SAFMA), we always greeted each other as city fellows. We shared the distinction of being born in the Pakistani city of Jhang.

Born Krishan Kumar to a Katyal family that lived in Jhang’s Bhabrana Mohalla (neighbourhood), K. K. Katyal, fondly called Jhangi, KK or Katyal sahib, passed away after a brief illness in New Delhi on June 8. He was 88.

Katyal had his early education in Jhang. He did his BA from Lahore where he edited the Urdu section of DAV (Dayanand Anglo-Vedic) College (now MAO College) magazine. He did LLB from Delhi University after the partition.

Katyal started his career in the News Chronicle soon after Independence. He later worked with The Statesman and Hindustan Times in Delhi. According to English-language Indian newspaper The Hindu, Katyal led the newspaper’s wide-ranging coverage from Indian capital of New Delhi during a particularly eventful phase of political change. In the 28 years that he spent at The Hindu (the paper launched its edition in Delhi in 1986), he superannuated in 1995 and continued till 2004, finally as Consulting Editor. He was awarded the G. K. Reddy Memorial prize in 1994 by the then Indian prime minister P V Narasimha Rao for his insightful columns and analytical write-ups.

“He was a thorough professional and great colleague,” says S Nihal Singh, his former colleague at The Statesman. “Krishan Kumar Katyal was a distinguished political reporter who had a nose for news, persistence in following up on tips and a talent for cultivating sources. He was an impressive, tall man with a Punjabi fondness for good food.”

Katyal had a great regard for Jhang-born Nobel laureate Dr Abdus Salam. He once told me that for the Nobel Prize ceremony, Dr Salam wore the traditional dress made of a white turban, a black achkan (a long jacket), white shalwar qameez and curly toed shoes called khussa from Jhang. He also cited Abdus Salam donating the full amount he received from the Nobel Prize to a fund mandated to help the brightest and most deserving young pre-university students from schools in the district of Jhang.

“Abdus Salam was in India shortly after he was awarded the Nobel prize in November 1979. One of the main purposes of his visit to call on his professor, Hans Raj Bhatla, who gave him the first lesson in physics in the early 1940s at the Government Intermediate College, Jhang. I had the privilege of being Salam’s contemporary in Jhang. Meeting him after over three decades was a great emotional experience, providing an opportunity for an informal, intimate interaction on all manner of issues,” he reminisced.

“I hosted a small dinner for him, with the guests mostly from Jhang, now settled in India. One of them, not impressed by the distinguished scientist’s advocacy for peace and harmony between India and Pakistan, burst out: ‘Let us fight it out — fight to the finish’ On this Salam commented: ‘Our friend seems to be a contractor’.”

Katyal worked towards improving India-Pakistan ties, and after his retirement in 2004 he was associated with Safma’s India Chapter as its president.

He was part of a group of journalists who accompanied Atal Bihari Vajpayee to Lahore in a significant prime ministerial outreach to Pakistan. Katyal had accompanied Vajpayee to Pakistan in 1978 as well when he was foreign minister in the first Janata government. Then he visited Jhang in a car provided by Pakistan’s protocol department. Once in Jhang, Katyal directed the car to the school (Government High School) where he was once a student. The principal was from one of the better known districts of UP. Once the principal was able to dispel his disbelief (that a journalist accompanying the Indian foreign minister from New Delhi had travelled from Lahore to Jhang simply to visit places associated with his formative years), he held Katyal in the tightest embrace. He had tears in his eyes “Yeh to aapne haj kiya hai” (Your visit to your old school is like the pilgrimage to Kaaba).

Katyal was even able to locate his old house. The friendship he struck with the new occupants of his house, a Muslim family from Amritsar, continued. Katyal and his wife visited them in Jhang; they stayed with Katyals in New Delhi.

In his book Journey to Amity: India and Musharraf’s Pakistan which deals with the developments in New Delhi’s relations with Islamabad, his interest in Pakistan’s affairs and his Pakistan connection remains strong. In the same book he wrote about his first visit to the house Katyals had left at the time of Independence:

“The present owner, Mohammed Hussain Salis, a jovial person was all smiles, all exuberance as he greeted me with a tight embrace. “It is your house, feel free, feel comfortable,” he said as he went around the modest dwelling. There were slight additions and small changes. … “You did not leave much in the house when you left”, he said with a naughty wink. “When did you move in?” I asked. He mentioned some date — which was at least six weeks after we had abandoned the house.

“Moving from the past to the present, he made two offers. “If you had buried some valuables here, you are at liberty to take all that,” he said. I thanked him for the offer but expressed my inability to make use of that, for the simple reason that we had not buried any treasure. Then came the second part of the offer. He gave me the address of his house in Amritsar and detail of what was buried where, saying with a flourish: “you are free to take all that too”. I have not made use of that offer. To me his “japha” [tight embrace] was more valuable.” Here ends the abridged version of the excerpt from his book.

It was at a packed dining hall in the Delhi’s India International Centre, where Katyal was a member and regular visitor, that he had hosted me the last time I visited India for a conference sometime ago. I didn’t know I was seeing Katyal sahib for the last time. I had promised to bring him Jhang’s lungi (a traditional garment worn around the waist) the next time we met. But now I can’t!

Ride For Peace: We have same enemies, let's fight this war together “I experienced nothing but love in Pakistan” -- Amardeep Singh, author of travelogue on Pakistan's Sikh legacy, grateful to Pakistan embassy for the visa