A matter of the heart 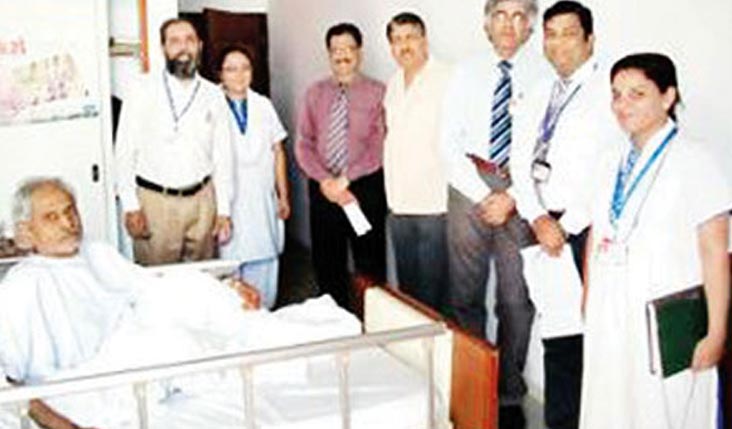 Pakistani officials made history by allowing the emergency landing of an airplane in order for an Indian passenger who was having a cardiac arrest to be rushed to hospital in Karachi.

On June 24, Vasant, 76, and his wife Nalini, 72, along with her brother Vijay Phadnis, were returning to India after a 10-day Scandinavian tour, on Turkish Airlines flight TK 720 from Istanbul to Mumbai.

As Nalini realized that Vasant was not well, she called for help. Cardiologist Dr Sudhir Deodhar, a resident of Kolhapur and a member of the Scandinavian tour group, stepped forward in response to the pilot’s in-flight announcement. Vasant began to respond to treatment, but being in the midst of a cardiac arrest, he needed to be urgently hospitalised.

The nearest ATC tower was at Karachi. The Turkish Airlines pilots requested an emergency landing for medical purposes, which was promptly granted. An ambulance was deployed in position at Karachi airport before the plane touched down. The medical team rushed the patient to the Aga Khan University Hospital, where a team of doctors in the cardiac care unit put him on a ventilator.

Normally, the fact that the three Indians – the patient, his wife, and her brother – did not have Pakistani visas, would have been a huge issue. But not only did the Pakistani authorities not insist on that formality, but treated them “like family”, to use their own words.

“I was not scared of landing in Pakistan as the priority was to save my husband. It was of course on my mind that we had no visas, but the Pakistani authorities never brought it up. In fact, their cooperation is something that we don’t have words to express. They treated us like family,” Nalini Bondale told reporters in India. “One of the officials even asked his wife to come to the hospital and stay with me just so that I would feel safe.”

Turkish Airlines and Pakistani officials informed the Indian government, as well as Vasant’s and Nalini’s relatives in Thane.

“I decided to go to Pakistan at once,” said their son Jayant Bondale. “I was not sure if I would be able to get a visa in such a short time, but believe it or not, I got it in a matter of hours. I thank the Pakistani officials and the airline for their support.”

Vasant Bondale was discharged from the hospital on July 11 and returned to India that day on a Pakistan International Airlines flight. “All I remember is that Pakistani officials were warm and cordial,” he said.