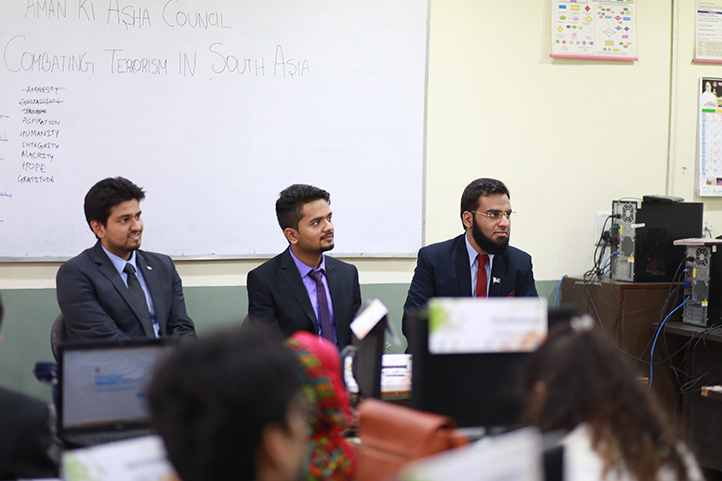 Young Indians and Pakistanis at a UN-style conference recently on “Combating Terrorism in South Asia” unanimously passed a single resolution tabled after two days of deliberation: the formation of a security union of Pakistan and India.

The conference was entirely initiated, conceived and organised by the students themselves, who also organised their own funding and followed up the difficult visa process.

Inspired by Aman ki Asha (hope for peace), the peace platform launched on Jan 1, 2010 by the Jang Group of Pakistan and the Times of India, they titled the event “Aman Ki Asha Council”.

This was the second edition of an international Model United Nations (MUN) conference first held at Nagpur in May, 2015, at which delegates had passed a unanimous resolution promoting peace-building efforts in Kashmir and between India and Pakistan.

This year’s event, attended by 12 delegates from Pakistan, was held on June 4-5, at the Yeshwantrao Chavan College of Engineering, Nagpur, India, which was also the venue of the last Nagpur MUN.

Former Mayor of Nagpur Anil Sole inaugurated the conference. Secretary General Rutwik Joshi introduced the executive board and the conference began with a small introduction by the co-chairs, Muhammad Tabish Javaid from Pakistan and Devang Shah (also the Conference Director) from India.

Tasked with working together to restore humanity in South Asia, each delegate was assigned an element from among the 42 laws of Ma’at which make up a human in Egyptian mythology — peace, virtue, compassion, generosity, hope, esteem and so on.

Once the delegates entered the council they had to think of themselves not as Indians or Pakistanis but as “global citizens working for the betterment of Kashmir”.

Delegates were also provided with study guides providing the Indian, Pakistani and Kashmiri points of view to help them research the agenda.

There were extensive debates in the first session between Indian and Pakistani delegates, with the co-chairs motivating participants to channelise their energy towards a constructive, solution-seeking discussion.

Delegates later bonded over a Cultural Night. The constructive discussions taking place led the executive board to request an overnight session, that the Secretary General approved. This discussion ranged from 12:00 am till 3:30 am, with participants showing no sign of fatigue.

Delegates formed blocks and were given a zero hour to come up with resolutions. For a resolution to be discussed in the council, it had to be co-authored by at least one Indian and one Pakistani delegate.

Surprisingly, the entire committee ended up sitting together in a circle and formulating one joint resolution collectively authored by “Aman Ki Asha Council”.  They discussed the resuolution clause by clause and passed it unanimously with no oppositions or abstentions.

“This was a symbolic of the common thought process that Indians and Pakistanis share even today,” said the organisers.

“If you delegate a task, you create followers. If you delegate authority, you create leaders,” says Conference Rapporteur Mayank Karnani. This was the idea behind this event, aiming to develop future leaders who would look into problems and try to find solutions without prejudice or preconceived notions.

“A meet involving some of the sharpest minds from both India and Pakistan was a reason to celebrate itself, them coming together to act like global citizens and discuss security issues in South Asia was unprecedented. All committee members made sure that they put their points across and that their opinions were heard.

“As a member of executive board, it was satisfying to see such participative delegates and an intense but healthy debate throughout. What really stood out was an overnight committee session where delegates discussed the ways to counter and cripple terror groups,” writes Karnani.

“Such enthusiasm to tackle the major issues plaguing both the nations was heart warming and inspirational. By the end of the conference, the delegates were able to present a resolution with guidelines to promote peace and ways to fight radical and terrorist organizations.

“It was sensational to see how youth from both the nations came together with willingness to act and break the age old shackles of distrust. When entering the committee, they came as nationals of respective countries. In Aman Ki Asha council, they were representatives of bigger institution, they were representing humanity.”

Co-chair Aman ki Asha Council Muhammad Tabish Javaid termed the event “a one of its kind experience” with “brilliant minds from both sides of the border” rising above their defined national agendas to see terrorism in South Asia as a transnational menace.

Most delegates, although first-timers, showed great zeal or enthusiasm. The drive to discuss contentious issues like the cause of terrorism, allegations of cross-border terrorism, religious fanaticism and other issues, “that for the first time in the history of MUN-ing we resorted to a nocturnal session due to shortage of time”.

“This time the delegates came more charged with enthusiasm and willingness to fight terrorism in South Asia. The dedication of the delegates can be easily noted by the fact that not only they readily accepted the proposal to have an overnight session, but pulled it off exceptionally well with the same energy and zeal. The delegates were well-researched in their quest to wipe terrorist groups from this region.”

The solution was a model organisation to be developed with the cooperation of the SAARC nations, to help the governments track the activities of non-state actors in both the nations.

“The depth of their nuanced discussion was remarkable,” said Shah. “With the success of this conference we continue to prove the power of unity and constructive discussions. I want to emphasize again that if we want to put an end to this animosity between Pakistan and India, it is the youth who need to get together. We as the future of both the nations have it in our hands to continue the animosity or to become each other’s strength.”

He acknowledged the support of the Home Ministry of India, the External Affairs Ministry and the Indian High Commission, Islamabad, particularly Cabinet Minister Nitin Gadkari.

“Last but not the least, I would like to thank my secretariat without whose relentless efforts this conference would not have been possible,” said Joshi. “We totally look forward to push our limits and make this conference even bigger and better next year.”

– Compiled from the report by Conference Rapporteur: Mayank Karnani

More photos of the event at the Facebook page Aman ki Asha Nagpur MUN. Selected photos at this link.

“I experienced nothing but love in Pakistan” -- Amardeep Singh, author of travelogue on Pakistan's Sikh legacy, grateful to Pakistan embassy for the visa “Sarabjit yaan sab ki jeet?”