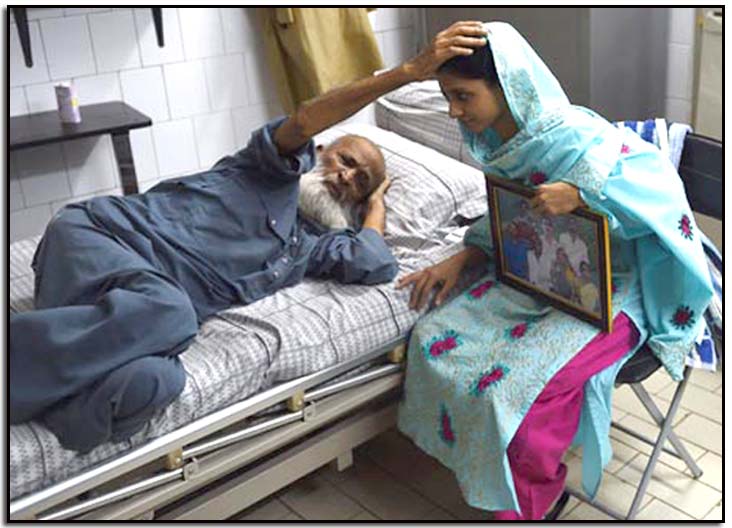 Deaf and mute Indian woman Geeta is set to return home from Pakistan after 12 years thanks largely to Salman Khan-starrer Bollywood film Bajrangi Bhaijaan’s success. The reel life story of the film’s main character, Shahida aka Munni, mirrors that of Geeta’s real life. Geeta was found alone on the Lahore Railway Station after she got off the Samjautha Express.

She had mysteriously boarded the cross-border train after attending a fair on the Indian side of Punjab, where her father worked as a mason. Likewise, Munni gets off a train in the film while chasing a sheep as her mother falls asleep while the two travel to India for pilgrimage. The waves that the film made with its rare sensitive portrayal of cross-border characters and parallels it drew with Geeta’s story stirred an inert bureaucracy into action. The urgency fructified when Geeta identified her family in a remote Bihar river island village, whose photographs were arranged based on the details she managed to scribble about it in Hindi.

Geeta would be handed over to her family in Bihar after a DNA test upon her return to India on October 26 while another Uttar Pradesh couple too is claiming her as their lost daughter. Hopefully, Geeta would be able to find her real family sooner to help her reach closure after a decade-long ordeal. But the torrid time she spent away from her family has a silver lining for Geeta as well as the love-hate and schizophrenic relationship between India and Pakistan. She was loved and cared for deeply so much so that a small temple with several deities was built for her to pray when her hosts realized she was a Hindu. She would bring the temple along with her.

The focus on Geeta’s extraordinary story importantly coincides with very difficult times in usually-thorny India-Pakistan ties. It again reaffirms innate goodness – something Bajrangi Bhaijaan too underlined — of ordinary human beings on the either side of the divide. And such instances galore. Pakistani girl Saba, suffering from a rare disorder, returned home after ordinary Mumbai people crowd-funded her treatment on October 12. The generosity of Saba’s benefactors was overshadowed by Shiv Sena’s attack on activist Sudheendra Kulkarni for hosting ex-Pakistan foreign minister Khurshid Mahmud Kasuri’s book launch on the same day. But typical small-mindedness of the Sena cannot outweigh love and care dozens of kids like Saba have found in Mumbai hospitals.

Mostly hate mongers hog all the limelight while men like Abdul Sattar Edhi, who has been to Geeta what Salman’s character was to Munni in Bhajrangi Bhaijaan, remain virtually unknown in the either country. Edhi and his wife, Bilquees, have been like Geeta’s parents since she strayed across the border and was sheltered at one of their shelter homes. Geeta is among tens of thousands whom Edhi has helped since the 1950s when he begged on Karachi streets to buy a rickety ambulance for his charity work. Edhi’s charity empire took off in 1957 when he established a tented hospital amid a flu outbreak in Karachi. The empire has come a long way since then and now owns air ambulances as well while Edhi remains go-to person for tens of thousands of have nots whom the state has consistently failed.

Edhi is, in fact, synonymous with selfless service to humanity and charitable work in Pakistan. He has been likened to Mother Teresa for his ubiquitous network of orphanages, shelter homes, rehabilitation centres, hostels and ambulances headquartered inside a small room near a Karachi slum. Edhi’s biggest contribution has been the dignity he has given to unwanted children in Pakistan. He has left cradles outside Edhi centres to encourage mothers to leave their unwanted kids there instead of killing them. The unwanted children are fed, clothed and educated at Edhi homes and call Edhi ‘Abu (father)’. Edhi has embraced other outcasts — drug addicts and mentally ill — too and sheltered them at his homes.

Edhi, a bearded saintly figure, is known for his frugality and owns just two pairs of kameez shalwar. His austerity has been his hallmark, which adds to his appeal as perhaps the second most revered Pakistani after another Gujarati, Muhammad Ali Jinnah. Like Jinnah and his great contemporary, Mahatma Gandhi, Pakistan’s living saint has his roots in Gujarat’s Kathiawar Peninsula. Edhi was born there in 1928 into a Memon family at Bantva, barely 60km from Mahatma Gandhi’s place of birth – Porbandar. He attended a Gujarati-language school in his village before the horrors of partition uprooted from his village and forced him to migrate penniless to Pakistan in 1947.

Thousands of Gujaratis like Edhi arrived in Pakistan in a state of virtual penury after partition. But they have since then punched much above their weight to contribute immensely to the economy of their adopted country. Gujaratis account for just 1% of Pakistan’s population and are concentrated in Karachi, but contribute greatly to around 50% to the country’s GDP the city alone generates. Gujarati trading communities like Memons, who belonged to Lohana mercantile caste and converted to Islam in the 14th century, Khojas and Bohras run multi-national companies, own five-star hotels, banks, multiplexes and manufacture cars in Pakistan besides dominating the country’s biggest stock exchange. This too underlines the similarities that have endured between Indians and Pakistanis despite seven decades of separation. We can ignore them at our own peril and let a handful of haters ruin the shared destinies.