#ProfileForPeace call goes viral: ‘I am an Indian & I don’t hate Pakistan’ 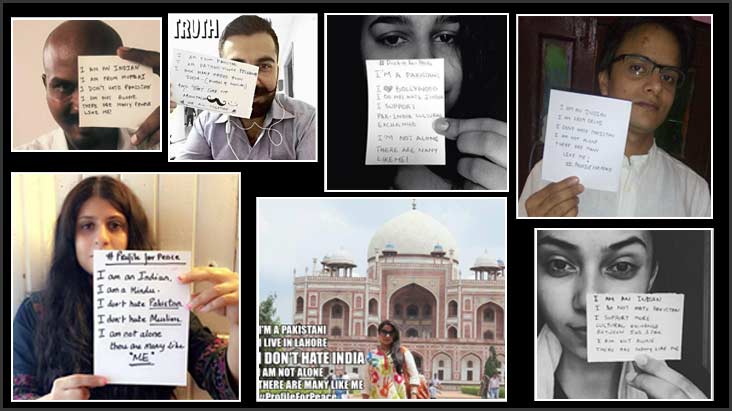 Armchair activism isn’t a bad word any more. In fact, there’s nothing beyond its scope if people decide to sit on a chair and raise their virtual voice. The recent instances of hate against Pakistan and the Shiv Sena-imposed extra-egal ban on artistes, writers and sportspersons from across the border has triggered a spontaneous online campaign that has spurred support beyond boundaries and could hold a lesson for politicians.

Instagram, with thousands of Indians from Kerala to Kashmir and Pakistanis from Lahore to Karachi as well as those living in the US, UK and UAE changing their profile pictures to one with a little love note scribble that says where they are from, that they don’t hate each other, and are only being divided by hate politics.

The campaign was started by 36-year-old Bandra-based Ram Subramanian, who calls himself an artivist. He is riled by recent incidents of Pakistani artistes being banned and shunned by Sainiks in Mumbai. “It had been brewing in my head ever since I heard of a series of bans and attacks. Most of us common blokes don’t feel such hate nor want these fights. And when you close the doors to art you open up a door for dark and unwanted things to come in,” he said.

So he took to Facebook on the night of Dussehra to express himself via a selfie with a post-it note that read, “I am an Indian. I am from Mumbai. I don’t hate Pakistan. I am not alone. There are many people like me!” He made that his profile picture. “No more artists being banned. This is my voice. This is our voice for our Mumbai, our India. Enough of hate politics,” he wrote further and managed to inspire a few thousand people from all ages and walks of life who are now following his route and sending out their message of love and peace across the border.

Sudheendra Kulkarni, chairman of the Observer Research Foundation who was recently attacked by the Sena for organizing the book launch of ex-Pakistan foreign minister Khurshid Kasuri, said the online peace campaign showed wonderful use of the social media by ordinary Indians and Pakistanis for spreading the message of peace and friendship between neighbours who have been estranged for historical reasons.

“It is a response to hate-mongers on both the Indian and Pakistani side by Indians and Pakistanis speaking in one voice of sanity and determination to isolate those indulging in violence, and it is a campaign to urge the two governments to resolve the problems that have caused animosity. This is people’s voice speaking to those in power. People at the top must listen to it,” he said.

Subramaniam said, “It’s important at this point to communicate with each other, and the Internet allows us to do that.”

This is not the first time Subramanian has initiated a friendly dialogue between the neighbours. In the winter of 2014 this writer and ad filmmaker had spun off the first Indian velfie (video selfies) movement with a three-minute film titled Pause that compared the Indo-Pak boundaries to walls between homes and led to the ‘velfie’  movement called the “DearNeighbour” Peace Challenge a year ago that is currently back on the trending charts with a spate of #ProfileForPeace messages on its wall. At a time when most voices had gone quiet out of fear #ProfileForPeace came calling and opened up not just those living in metros but from pockets like Aurangabad in Bihar or Gujranwala in Pakistan.

Among those sitting miles away, trying to reclaim their right is Siddhartha Gadiraju from Virginia. “The past might be gray. Lets not pass the hatred to future generations…India has lot to gain from peace with Pak than hatred. Let common people voice become the voice of nation,” he writes. Mary Deepa David posts from Dubai. “I’m from India and a proud Indian. I eat beef, because what I eat is my choice and constitutional right. I look at people as human beings, religion is their private and personal affair. Why the hell should I hate Pakistanis?”

The collective of outpourings is growing stronger every hour. What with music director Vishal Dadlani and filmmaker Abbar Tyrewala and Fatima Bhutto joining in.

But what if now they came chasing Subramanian? “If Shiv Sena wants to meet and beat, I wish they’d call me over to their office. I just got mine renovated!” he laughs it off.

Geeta's return "I fully support peace between India and Pakistan"

One thought on “#ProfileForPeace call goes viral: ‘I am an Indian & I don’t hate Pakistan’”