“I fully support peace between India and Pakistan” 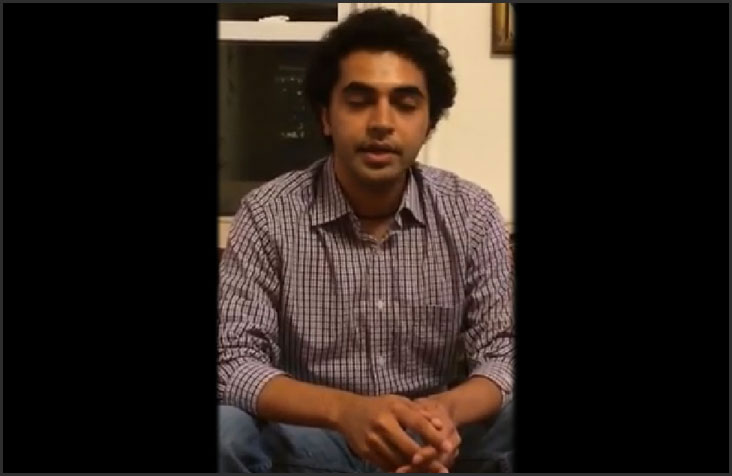 Aditya Shrinivas: "I just felt like singing it". Still from video by Raza Rumi

Last week, I met Aditya Shrinivas, a Ph.D student from Bangalore, India, who is studying Applied Economics at the University of Illinois.

Our mutual friend, Raza Habib Raja, who was at Cornell University with Aditya, introduced us when Aditya visited the college where I’m currently based in upstate New York. He mentioned that Aditya likes to sing and knows a Pakistani song.

At my request, Aditya sang that song – and it was an absolute pleasure to hear it. The song is ‘Akelay na janaa’ – an all-time favorite from a Pakistan film ‘Armaan’ (1966).

What is even more surprising and impressive is that Aditya has no knowledge of Urdu and only “some broken Hindi” as he puts it.

There has been an overwhelmingly positive response to the video I posted of him singing the song, shared on my Facebook wall with the caption “A South Indian student sings a Pakistani song!”

“Music is very close to my heart. I love to sing for the love of singing”, he told me.

When I asked how he found this song, Aditya said that when he heard the song for the first time through a Pakistani friend at Cornell, the tune “touched” his heart. It is the musicality of this song that attracted him. “I just felt like singing it,” he said.

He went to YouTube and watched it over and over again, writing down the lyrics in English and practicing it till he got the lyrics and tune.

His rendering of the song is remarkable by itself. The pronunciation may not be perfect in places but it is the spirit as well as the universal appeal of good music that moved me.

This is why music and the arts are so important. They accomplish what other media can’t and also puncture the walls of hate and ignorance.

I was also curious about what he thinks of peace with Pakistan. This is what he told me: “I fully support peace between India and Pakistan. I hope every Indian and Pakistani shares the same trust and friendship that I share with my dear Pakistani friend Raza Habib Raja.”

Our media narratives and politics of jingoism hide countless stories like these. As certain powerful quarters continue to fuel conflict in the region, we need to remind them of the larger world beyond headlines and shelling at the border.

Raza Rumi is an author, journalist and a policy analyst. He is currently based at Ithaca College, USA

#ProfileForPeace call goes viral: ‘I am an Indian & I don’t hate Pakistan' Why a Sena attack on Najam Sethi is ironic