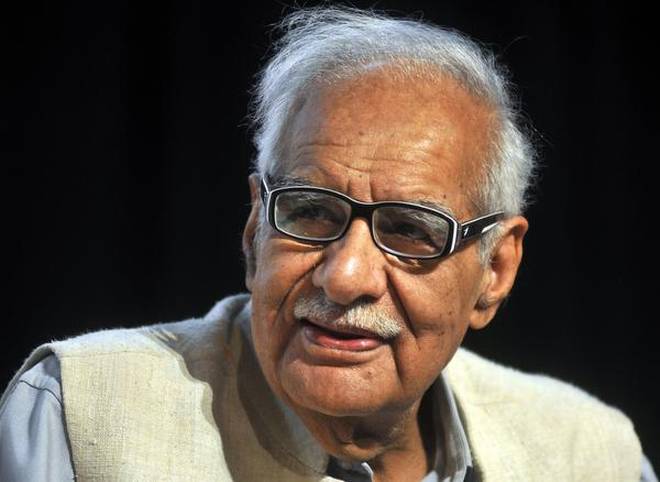 The celebrated journalist, author, parliamentarian, peacemonger Kuldip Nayar flagged off the Aman Dost Yatraat the Gandhi Darshan in New Delhi on August 12 this year, the unique annual peace and friendship pilgrimage to the border he initiated 23 years ago. The tradition entails peace activists on both sides of the border gathering at Attari-Wagah on the night of 14-15 August with candles and songs to commemorate a Pakistan and India’s Independence Days together.

The flagging-off ceremony turned out to be his last public event, fittingly enough. A few days after the event, he was hospitalized after a cough and cold that developed into pneumonia, leading to his unexpected passing away in the early hours of 23 August.

Kuldip Nayar wouldn’t have it any other way. He went, so to speak, with his pen in his hand. He had finished writing a tribute to former prime minister Atal Bihari Vajpayee who passed away on 16 August, with whom he had traveled to Lahore for the launch of the Delhi-Lahore Bus service and the ground-breaking Lahore Declaration.

Sadly, Nayar was himself taken ill before he could send it to his syndicated publishers. His last published column appeared in Lokmat Times the morning he passed away.

Kuldip Nayar, 95, wrote this column before his final exit. The day he was cremated at Lodhi his column appeared in Lokmat Times!
He criticised the government for its vote-bank politics over NRC. His spirit to keep on working and his warmth will be greatly missed. pic.twitter.com/8ZMTQAvzpZ

The joint commemoration of Pakistan and India’s Independence Days at the border that he initiated remains a powerful event symbolizing the yearning on both sides for peace. Every year, governments on both sides create obstacles in the way of the commemoration, and nay-sayers scoff at it as a ‘useless exercise’ of what they disparage as the ‘mombatti (candle) mafia’. And yet, every year, India’s Border Security Forces and the Pakistan Rangers are“mute witnesses to this courageous tableau” comments Dr Syeda Hameed, aformer member of the Planning Commission of India, founder trustee of the Women’s Initiative for Peace in South Asia (WIPSA) and the Centre for Dialogue and Reconciliation, in her poignant tribute in The Citizen.

The fact that despite all the blockages and attempts to obstruct it, this movement has continued with the younger generation joining in, speaks for the people’s powerful cross-border aspirations for peace.

“No matter which government was in power they could not stop this movement,” writes Dr Hameed.

Although in recent years Kuldip Nayar had been physically unable to go to the border due to reduced mobility, his leadership and example “enabled Pakistani and Indian friends to stand on the either side shining their candles to dispel the darkness and distance between the two neighbors,” writes Dr Hameed.

She relates how this year, she along with several others, “led by the indomitable Mohini Giri herself in a wheelchair, Ram Mohan peace crusader from Panipat the land of Sufis” went to visit Nayar to invite him to flag off the yatra. They “were received with the usual Nayar hospitality”. He sat smiling at his desk, his wife Bharati at his side, as the guests crowded around.

At the Aman Dost Yatra flagging off ceremony, Kuldip Nayar walked to the stage with support. He “even climbed the two steps” and sat and listened to all the speeches before saying a few words himself, speaking poignantly of 1947 and the tragic exodus from West Punjab.

He reminisced about his student days “when Mohammad Ali Jinnah came to his college (in Lahore) and young Kuldip asked him a question about the fate of Hindus and Muslims in case partition happens. His mind was crystal clear, his speech was soft, his expression was sad but with a glimmer of hope,” writes Dr Hameed.

Two days later, at a packed hall in Amritsar, those participating in the Aman Dost Yatra from Delhi joined with locals at an event that began remembering Madeeha Gauhar and Asma Jahangir. However, Kuldip Nayar and his contribution to this movement were also much remembered – “how he had seeded the idea, how for several years he got thousands on both sides of the border to listen to Hans Raj Hans” – the Punjabi singer who joins the amanyatrees at the border every year.

“His presence was all pervasive in that packed auditorium. No one thought that the very next year it would be Kuldip who we would be commemorating. His friends Yadav, Manek and Bali told me that they were planning a big event in his honour in Delhi in September. I know they will still hold it,” writesDr Hameed.

Handing over the peace badge to the younger generation.

She spoke to him on the phone from Amritsar every morning for the three days she was there, reporting on the aman yatrees’ activities. “He had a very bad throat but I heard the keen edge and trace of joy in his voice. I could sense how keenly he listened when I recounted bit by bit our movement through the day leading to the midnight vigil at Wagah. I spoke to him about his friends, how they were missing him and how they were hoisting his flag of peace”.

That “bad throat” sadly landed him in hospital by the time Syeda Hameed returned in Delhi and she was unable to see him as he was not allowed visitors. She called his staff on Eid, her “special day to pray for him”. Early next morning he was gone.

Kuldip Nayar was truly“the gentle giant of India Pakistan peace” as Dr Hameed put it in her tribute. Her suggestion that both countries should honour him by opening the borders for a massive memorial meeting at Amritsar must be taken up. This could be the“start of opening the way for the two countries to begin a Kuldip Nayar-Asma Jahangir Peace Dialogue” to take forward their mission and to “bring solace to the hearts and minds of millions of Indians and Pakistanis”.

His funeral ceremony at Lodi Crematorium, Delhi, at 1 pm on 23 August, was attended by thousands who gathered to pay tribute to one of South Asia’s finest sons. Besides several prominent journalists, many of whom he had mentored, those who arrived to pay their last respects included former Vice-President Hamid Ansari, former Prime Minister Manmohan Singh, Union minister Rajyavardhan Singh Rathore, Delhi Chief Minister Arvind Kejriwal, and iconic photographer Raghu Rai. Many described his passing as “the end of an era”.

Born on 14 August 1923 in Sialkot, Kuldip Nayar graduated from Forman Christian College, Lahore and had a law degree from Law College, Lahore. In September 1947, he was forced to migrate across the border, a penniless refugee like so many others. He was never bitter about the experience and worked all his life to mend relations between India and Pakistan. Belonging to a pre-partition generation who did not equate language with religion, his fluency in Urdu landed him his first job in 1948, with the Urdu daily “Anjam” in newly independent India. In 1952, he went on a scholarship to study journalism at the respected Medill School of Journalism, Northwestern University.

The list of Kuldip Nayar’s accomplishments, positions held, honours received and 15 books authored (he was working on another when he passed on) is too long for this space. He was an activist who had the courage of his convictions, and was imprisoned for standing against Indira Gandhi’s notorious Emergency. Forced out of his newspaper job, he used the opportunity to get his column ‘Between the lines’ published in other places, becoming one of India’s first syndicated columnists.

Kuldip Nayar is survived by his wife Bharti Nayar and sons Sudhir Nayar and Rajiv Nayar. The family’s loss comes tragically soon after the passing away on 20 April 2018 of Bharati Nayar’s brother Rajinder Sachar, a former Chief Justice of the Delhi High Court, a member of United Nations Sub-Commission on the Promotion and Protection of Human Rights and counsel for the People’s Union for Civil Liberties.

The eldest of Kuldip Nayar’s three grandchildren Mandira Nayar is a journalist with The Week in Delhi, and a member of the South Asian Women in Media (SAWM) network, taking forward her grandfather’s mission of regional peace in her own way.

Kuldip Nayar’s departure from this world leaves bereft not only his family but generations of journalists and peace activists on either side of the border who will continue to take inspiration from his life and work.