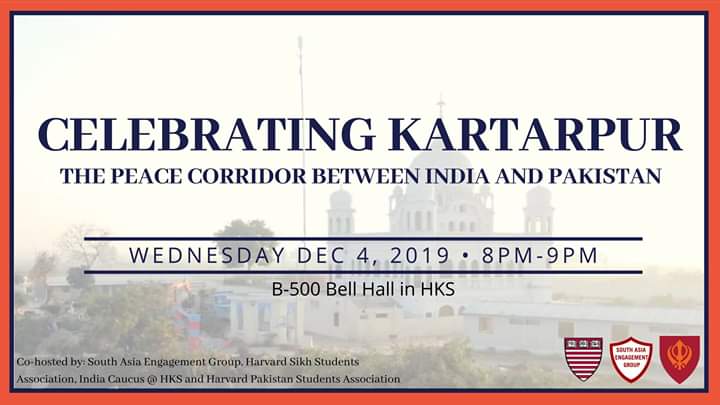 Indians and Pakistanis in faraway USA are planning a solidarity peace programme featuring the Kartarpur corridor as a window of peace between their countries. The corridor allows pilgrims from India to pay obeisance at Kartarpur Sahib Gurdwara, Pakistan, where the first Sikh master Guru Nanak Dev spent over 17 years of his life.

The South Asia Engagement Group, Harvard Sikh Students Association, India Caucus at HKS, and Harvard Pakistan Students Group are co-hosting the solidarity event. Students, academics and peace activists will discuss the corridor as an example of how the two countries, despite conflict, can create opportunities to cooperate and find common ground to improve the lives of people.

Speakers at the event include the Sikh Chaplain of Harvard University Harpreet Singh, MP from India Pratap Singh Bajwa and Ambassador for Kartarpur Senator Faisal Javed Khan from Pakistan.

Seventy-two years after partition in 1947, the corridor now enables Indian devotees to visit the Gurdwara at Dera Baba Nanak, a site that many in India could only access through binoculars 4.2 kilometres across the border.

“We are celebrating the peace corridor to show how such initiatives can ease hostilities between two countries”, says Nadia Rehman, co-chair of the Harvard South Asia Engagement Group.