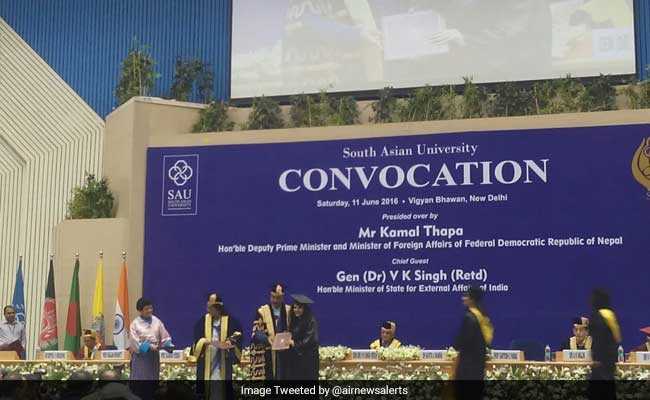 The students were awarded degrees during the 3rd Convocation of SAU held on 7 June 2018.

The SAU’s President Dr. Kavita Sharma, in her welcome address, highlighted the University’s progress thus far and its vision and future plans.

The decision to establish the South Asian University was taken at the 14th SAARC Summit in New Delhi in April 2007. The University started taking students from August 2010.

This year, a total of 161 students received their Master’s degrees, while 10 got M.Phil and 4 PhD degrees.

The five Pakistani students completed their Masters from SAU in diverse disciplines – including Biotechnology, Computer Science, Law, and International Relations.

The chief guest on the occasion was the President of Indian Council for Cultural Relations (ICCR), Dr. Vinay Sahasrabuddhe.

The Secretary General of SAARC, Amjad Hussain B. Sial, also participated in the Convocation and delivered an address.

Speaking to the Pakistani graduates separately, High Commissioner Sohail Mahmood extended warm felicitations to them and their families and wished them well in their professional pursuits in the future.

High Commissioner Sohail Mahmood also emphasized the pivotal role that the South Asian University could play in bringing the youth from South Asian nations together for grooming and higher learning.

He hoped that more Pakistani students would be able to join SAU in the coming years — enriching its multi-national character and contributing to the success of this collaborative SAARC project.

After the graduation of five Masters students, there are now two PhD students from Pakistan at SAU. As per the agreed system, Pakistan has 10 percent quota of total seats in the University.

High Commissioner Sohail Mahmood also expressed the hope that SAARC, a symbol of hope and collective aspirations for the people of South Asia, would make progress as an effective instrument of regional cooperation and promote the goals of socio-economic development.