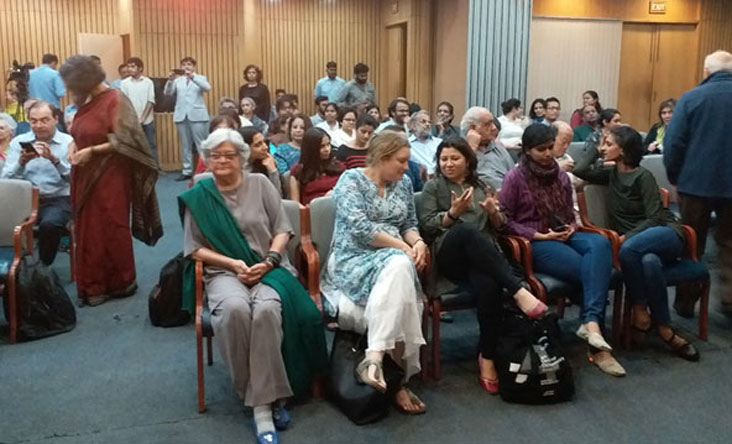 Amidst the ongoing uncertain political relationship between India and Pakistan, a lecture series in Delhi by the renowned Pakistani artist Salima Hashmi provided some much-needed insights into life across the border.

Daughter of the legendary poet of South Asia Faiz Ahmed Faiz, Salima Hashmi or Salima ji, as I and many others respectfully call her, has never dabbled in poetry. That would be just too much pressure, being Faiz’s daughter. In any case, as she says, she was always more fascinated with the visual rather than the spoken arts.

Her talk on ‘Contemporary Arts of Lahore’ organised by Dalmiya Foundation on the evening of Nov. 2, 2017, hosted by Vasundhara Dalmiya, took place at the India International Centre, a known hub of culture and philosophical endeavour. People thronged the auditorium, which was packed to capacity. In fact, latecomers had to stand as the seats filled up.

Salima Hashmi responding to a question-answer session at the end of her workshop at Ambedkar University, Delhi

Salima ji gave a detailed presentation on Lahore’s thriving art and cultural scene, supplemented by lovely visuals. She started her presentation from the 1980s, when state depression in Pakistan catalysed “persuasion arts”. Artist, led by the students and faculty at the prestigious National College of Arts (NCA) in Lahore struggled to reclaim their space. A torchbearer as the seat of creative arts education in Pakistan, NCA remained the focal point and a central driving theme of her presentation. The college became a source of inspiration behind the formation of Pakistan’s first ever liberal arts higher education institution, the Beaconhouse National University (BNU), also in Lahore.

For all its plus points, NCA had certain shortcomings in its rigid frameworks that further led to the development of the Mariyam Dawood School of Visual Arts & Design (SVAD) at BNU, with the vision to give students more autonomy and flexibility in creating their arts, without bureaucratic hurdles. Its founding Dean was Salima Hashmi. During her talk, she narrated many anecdotes about the challenges she faced and how she coped with them.

A lot of bull: Pakistani artists are responding to socio-political issues with innovation and satire, says Salima Hashmi.

Salima Hashmi also spoke about the thriving night life of the famous M.M. Alam Road and the “cosmo-political” malls in Lahore that are defining the city’s changing cultural map. Referring to the darker side of Pakistan including social pressures, especially on women, she showed how artists have responded to these pressures, regularly referencing these issues in their work.

The surprise guest of the evening was Pakistan’s new High Commissioner to India, Sohail Mehmood, accompanied by his wife and the Political counsellor at the Pakistan embassy Tariq Karim. As word spread that they were in the audience, many voices were heard saying they want to visit Pakistan. Had they known Pakistani Ambassador would be there, said some, they would have brought along their passports. After the event ended, many people approached him to inquire about possible collaborations on art and visits to artistic events in Pakistan.

Among other dignitaries was Prof. Sasanka Perera, Vice-President of the South Asian University in Delhi, seen quietly enjoying Salima Hashmi’s talk with his students from SAU.

The following afternoon, Salima Hashmi conducted a workshop with students at Ambedkar University on Contemporary Arts Education in Pakistan. She also spoke about the evolution of Indus Valley School of Arts and Architecture (IVSAA), Karachi, besides National College of Arts and Beaconhouse National University in Lahore. IVSAA was primarily envisaged to be established on the lines of NCA, but it has forged its own distinct path in arts education, and still evolving.

Salima Hashmi’s visit to Delhi, at a time when cross-cultural exchanges between the two nations have all but ceased, was an affirmation that art really knows no boundary, especially when derived from the same heritage. Sharing experiences, thoughts and ideas gives nourishment to the artistic conscience of the entire South Asian region. Her visit and the warm response she got also awakens some hope of a new dawn of artistic collaborations between the two sibling nations.

Harsh Narayan is a Delhi based filmmaker working on Indo-Pak collaborative film projects and other artistic collaborations and exchanges for the past 15 years. Email: [email protected]. Twitter: @harshnarayan. Facebook: Harsh.Filmmaker